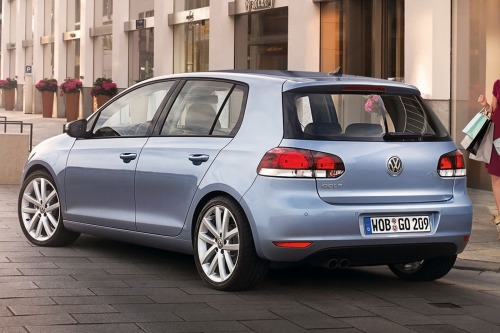 Volkswagen first introduced the Golf in 1974 as a modern alternative for the Beetle with a funky hatchback style that gave consumers a more conservative option for a compact car. While it’s been known by a variety of names, the popularity of this hatchback has stuck, helping the German carmaker become known for something other than the beloved “Bug.”

The Golf was first introduced in May 1974, though it was called the Volkswagen Rabbit in North America, and was based on the Jetta platform. After its introduction and subsequent popularity, many carmakers followed Volkswagen’s path, introducing hatchbacks into the U.S. market. The Golf name came in the second generation and was thought to origination from the Volkswagen tradition of naming their cars after prominent winds or currents.

When the Golf was first introduced, it was offered in a single trim level with front-wheel drive. Now in its seventh generation, the compact car is available in a variety of popular Volkswagen drive systems, including the TSI, GTI, TDI, GTD, and TGI. An electric version is even offered, introduced at the 2013 Frankfurt Motor Show.