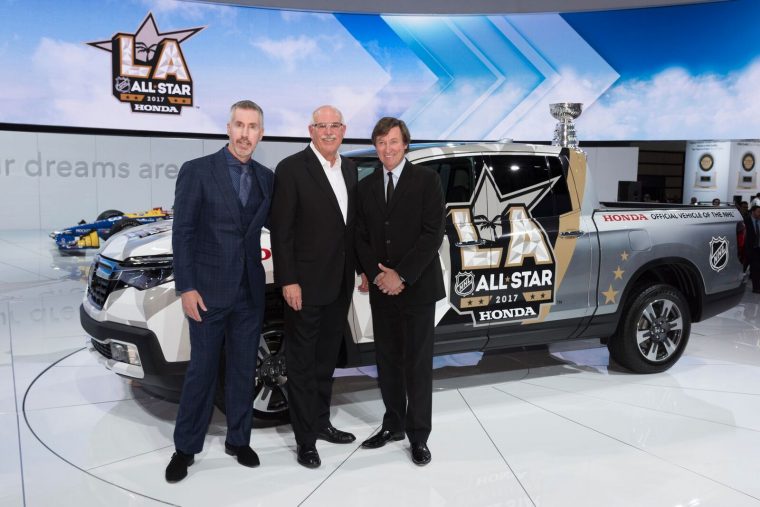 Honda announced today at the Los Angeles Auto Show that it will serve as the title sponsor of the 2017 NHL All-Star Game happening in LA this January. Honda also took the opportunity to reveal the custom-wrapped 2017 Honda NHL All-Star Ridgeline that will be given to the game’s most valuable player.

Legendary hockey player Wayne Gretzky joined Honda for the Ridgeline’s unveiling. “The Great One” even joked that the pickup might be cool enough to bring him (and his jersey) out of retirement.

“The NHL All-Star Game and the NHL All-Star Skills Competition are the greatest showcases of hockey talent in the world and I’m excited to have the game and fan events in my home of Los Angeles,” Gretzky said. “With the Honda Ridgeline truck going to the most valuable player, I’m tempted to wear number 99 to win the award.” 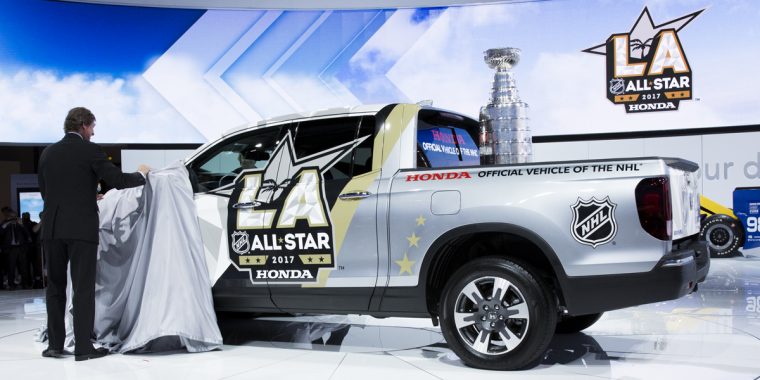 The 2017 NHL All-Star Ridgeline will be awarded to the MVP at the conclusion of the game, which will be played on Sunday, January 29th at the Staples Center. From now until November 27th, though, anyone who attends the LA Auto Show can get up close and personal with the pickup by visiting Honda’s booth at the Los Angeles Convention Center.

Honda will also serve as the sponsor for one of the skills in the 2017 NHL All-Star Skills Competition on Saturday, January 28th, as well as the Honda NHL Breakaway Challenge, in which players show off their best moves and the winner is determined by fan vote.

“Honda shares a love for the game of hockey with millions of fans around the world, and we are pleased to support the effort to host this ultimate showcase of the NHL and its incredibly talented players in our backyard,” said Honda executive Jeff Conrad. “We look forward to working with the NHL to create some fun for fans throughout the 2017 All-Star Weekend including the intersection of Hockey and Hollywood that will be arriving at LA Live the last weekend of January.”

“The 2017 NHL All-Star Weekend marks Honda’s third straight year as title sponsor and demonstrates their commitment to hockey fans—both in Southern California and across North America,” said NHL executive Brian Jennings. “Honda shares our goal to make each All-Star Weekend more entertaining than the last, and are amazing partners in the continued growth and success of the NHL.”

Seasonal Reading: How to save money on Thanksgiving dinner