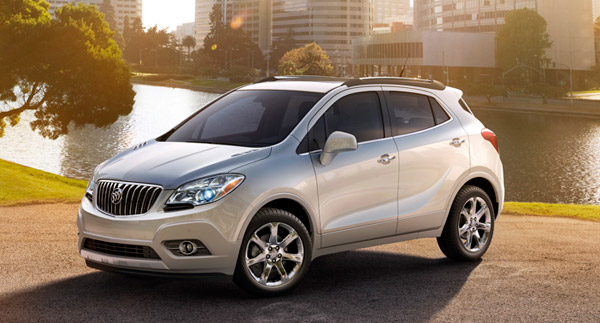 The Buick brand is not normally synonymous with small. When asked to picture a Buick, the majority of us would immediately see a mental picture of our grandparent’s LeSabre boat, wide enough to take up two parking spots at the grocery and long enough to barely fit in any garage. GM’s Buick has decided to take a new direction though, revamping its look with the 2013 Buick Encore, a compact SUV that is just that—compact.

Rather than the normally large proportions associated with the name, the 2013 Encore presents the customer with smaller versions of features characteristically seen in larger Buick models, including the rounded front and signature grille. Combined with a rounded roof, this compact SUV looks strikingly similar to a hedgehog, bringing an adjective to mind not normally associated with cars—adorable. Who doesn’t love a hedgehog?

Animal metaphors aside, the Encore presents Americans with a more European version of a car. Shorter and narrower than either the RAV4 or a Ford Escape, the Encore is representative of a new era where compact is cool, reinforcing that the less actually is more in this more eco-friendly society. From February to June, 13,000 units have already been sold in the US, an admirable start in a normally “Super-size Me” country. Make sure you stop by your local dealer to see how such a small car can make such a big splash!

This post brought to you buy Lake Chevy in Devils Lake, ND.