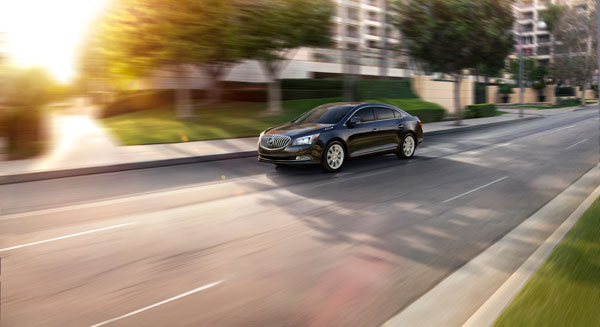 What’s New for the 2014 Buick LaCrosse

In addition to refreshed interior and exterior styling, the Buick LaCrosse has received new radar and sensory technology in 2014, including adaptive cruise control, rear cross-traffic alert, and lane change alerts.

The LaCrosse has been at the center of Buick’s rejuvenation as a luxury brand, and because of that, its sleek exterior is one of the most modern in its class of midsize sedans, and it gets even better in 2014. The 2014 Buick LaCrosse flaunts an all-new hood and grille that deliver a bold stance that runs throughout the vehicle, and is completed by a new trunk lid and updated bumpers.

The 2014 Buick LaCrosse is available with two engine options. The base engine is surprisingly a mild hybrid powered by a 2.4-liter four-cylinder engine paired with an 11-kilowatt motor and a lithium-ion battery pack whose combined output is 182 horsepower and 172 lb-ft of torque.

For increased performance, drivers can opt for the available 3.6-liter V6 that generates 303 horsepower and 264 lb-ft of torque, which propel the 2014 LaCrosse from 0-60 mph in 6.8 seconds.

The 2014 Buick LaCrosse now boasts some of the most advanced safety features in the industry, including blind spot monitoring, lane change alerts, rear cross-traffic alert, lane departure warning system, and forward collision warning. What sets Buick’s safety features apart is the available vibrating “Safety Alert” driver seat, which vibrates when there is the risk of a collision.