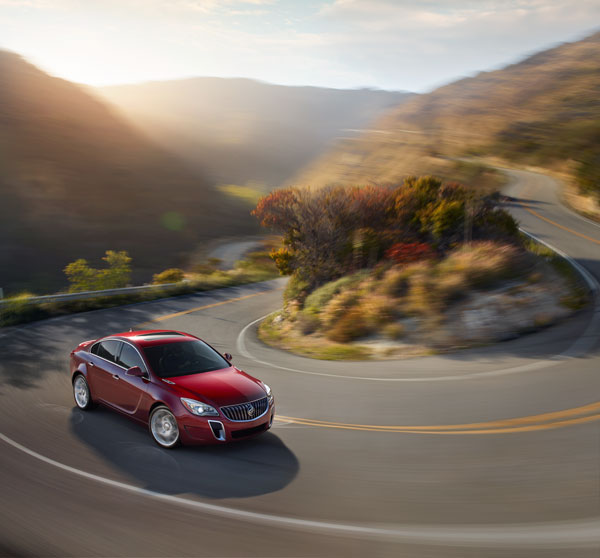 The 2014 Buick Regal builds on its recent redesign with interior and exterior updates, and now offers an all-wheel-drive powertrain option that adds to other powertrain enhancements for the new model year.

The 2014 Regal flaunts the sporty, aerodynamic styling that Buick is striving to become synonymous with. The LED signature lighting headlamps and wraparound LED taillamps deliver an air of luxury to the 2014 Regal’s performance-ready stance, which is accentuated by an all-new integrated deck-lid spoiler.

The Buck Regal has been marketed as a sports sedan, and in 2014 it is earning that moniker. The 2014 Buick Regal is powered by a standard, turbocharged 2.0-liter four-cylinder engine that pumps out 259 horsepower and 295 lb-ft of torque.

For the more fuel-conscious driver, there is also a 2.4-liter ECOTEC four-cylinder engine with eAssist, which still produces 182 horsepower and 172 lb-ft of torque despite its hybrid powertrain combination.

Buick’s plan to compete with the stalwarts of the luxury segment does not only include sleek styling. Buick aims to give drivers more for their dollar through a plethora of standard features, and in the 2014 Regal, that list includes leather upholstery, heated front seats, dual-zone automatic climate control, a rearview camera, and Buick’s IntelliLink infotainment system.