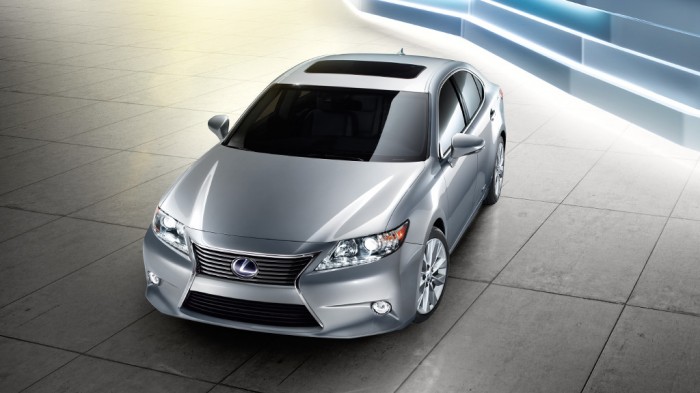 Xenon headlights are now standard for the Lexus ES Hybrid, while ventilated seats are offered as an option for those sedans with the NuLuxe leatherette upholstery. The Display Audio package also now offers Siri Eyes Free compatibility for newer iPhones

Some might think that the 2014 ES Hybrid has such a modernized and streamlined design so that it would be aesthetically pleasing, but really, it’s all about the aerodynamics. Each smooth line is meant to reduce drag, noise, and vibration to provide optimal performance and the highest fuel efficiency possible. The refined lines and attractive grille make it easy to see that this car is the quintessential Lexus.

A 2.5-liter four-cylinder engine and an electric motor powered a battery pack power the ES Hybrid. Together, the hybrid powertrain creates 200 horespower, making it easy and fuel efficient to get from one place to the next. The ES Hybrid’s zero to 60 mph time is an impressive 7.8 seconds, which is great for a hybrid.

EPA-Estimated fuel economy for the Hybrid is an outstanding 40 mpg combined, meaning you visits to the gas pump will go down tremendously.

High-end materials throughout the ES Hybrid’s cabin create a modern environment, while the styling of the dashboard adds the perfect touch of luxury. Add the bamboo wood interior trim and you won’t be disappointed. The most impressive feature you’d find in the cabin though isn’t the fancy features or great technology—it’s the back seat. An extended platform has enabled Lexus to make the most of additional space, creating the most spacious rear seats in its class.

Standard features like antilock brakes, stability and traction control, and Lexus Safety Connect come together with optional equipment like a rearview camera, front and rear parking sensors and automatic high-beam headlights that turn off when they detect other vehicles to keep passengers safe. Government crash testing awarded the 2014 ES Hybrid a five out of five stars for overall safety, while the Insurance Institute for Highway Safety gave the hybrid the highest possible rating of “Good” in the moderate-overal frontal offset, side-impact, and roof strength tests.