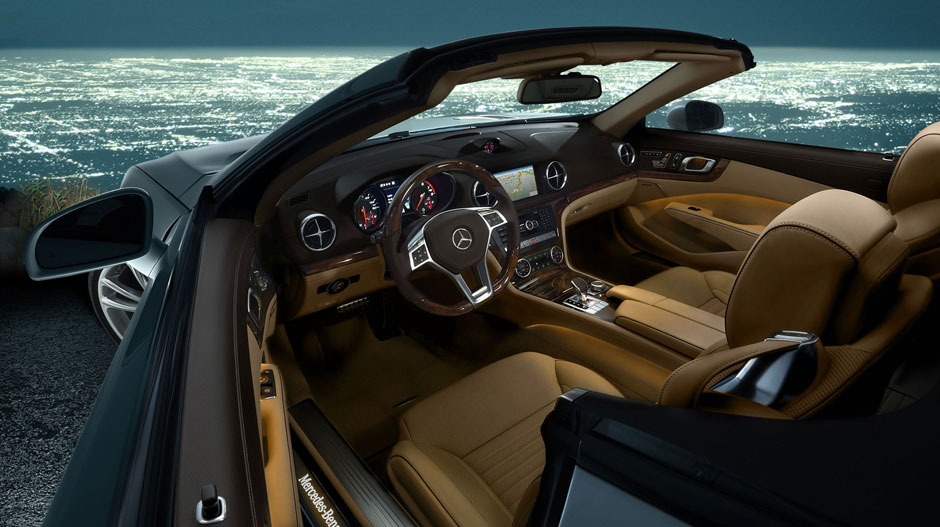 The 2014 incarnation of the SL-Class Roadster continues to project sophistication and style through impressive performance. The SL-Class Roadster was completely redesigned last year, and the 2014 version continues on these improvements with a now-standard Premium Package on all model trims.

On the outside, the SL-Class Roadster defines style with standard 18” wheels and an available MAGIC SKY CONTROL® panoramic roof. The darkened roof can be set to let the sun in at the touch of a button as electronically activated particles rearrange to reveal the open sky. The hard top can also be stowed in the composite trunk lid in a mere 16 seconds while maintaining enough room for a couple of suitcases.

The SL 550 Roadster offers a 429 horsepower biturbo V-8 paired to a 7-speed automatic with paddle shifters. Aboard the SL63 AMG, we step up to a 530-hp AMG biturbo V8 with an AMG SPEEDSHIFT MCT® 7-speed paddle shifter. The ultimate in power, however, comes in the form of the 2014 SL65 AMG. This bad boy comes bearing a V-12 that pumps out 621 horsepower and 738 lbs of torque to achieve 60 mph in 3.9 seconds.

Melding efficiency with a power house isn’t always easy, but Mercedes-Benz has given it a try. A lightweight aluminum body not only assists in speed, but also excels at fuel savings. Along with an aerodynamic body, the 2014 SL-Class Roadster features direct injection and ECO Start/Stop that automatically shuts off the engine while idling, restarting as the brake is released.

The interior exudes the same attention to detail that the SL-Class Roadster has presented since 1954. In 2014, the SL Roadster includes classic elements blended with state-of-the-art technology. The COMAND® system combines navigation, audio and system information in a high-resolution 7” screen.

Driver assist technology such as ATTENTION ASSIST ®, MAGIC VISION CONTROL®, and PRE-SAFE®. These elements not only deliver road condition information, but attend to the driver’s needs as well. ATTENTION ASSIST can detect drowsiness by analyzing 70 variables of driver behaviors in the first few minutes of each drive. MAGIC VISION CONTROL uses pre-heated wiper blades to deliver washer fluid precisely where it is needed instead of a vision-blocking spray. PRE-SAFE detects possible collisions and then tightens seatbelts, auto-adjusts the passenger seat, and rolls up all windows. In addition, dual-stage front, knee, and two side-impact air bags are at the ready in the event of a crash.