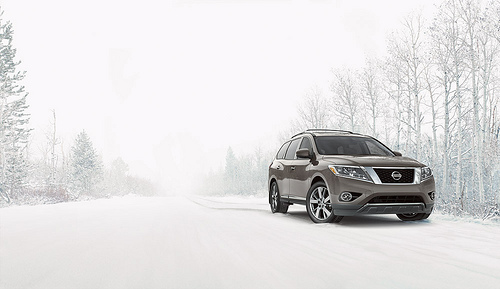 The 2014 Nissan Pathfinder is the Japanese automaker’s largest crossover SUV, but it still retains the sleek styling that has made its smaller siblings a success. Standard 18-inch alloy wheels provide an athletic stance, while simultaneously combining with rear privacy glass to give off an air of premium quality.

The 2014 Nissan Pathfinder is powered by a 3.5-liter V6 that generates 260 horsepower and 240 lb-ft of torque, which propels the Pathfinder from 0-60 mph in an even eight seconds and allows it to tow up to 5,000 pounds. All-wheel drive is also available.

The interior of the 2014 Nissan Pathfinder is adorned with premium material and elegant design that delivers a borderline-luxury feel. There is no lack of available technology in the 2014 Pathfinder, as features include an eight-inch touchscreen display, navigation, Bluetooth connectivity, and a 13-speaker Bose audio system.

Standard safety features on the 2014 Nissan Pathfinder include traction and stability control, antilock disc brakes, and a comprehensive suite of airbags that cover all three rows of seating. Rear parking sensors, a rearview camera, and a surround-view camera are also available.