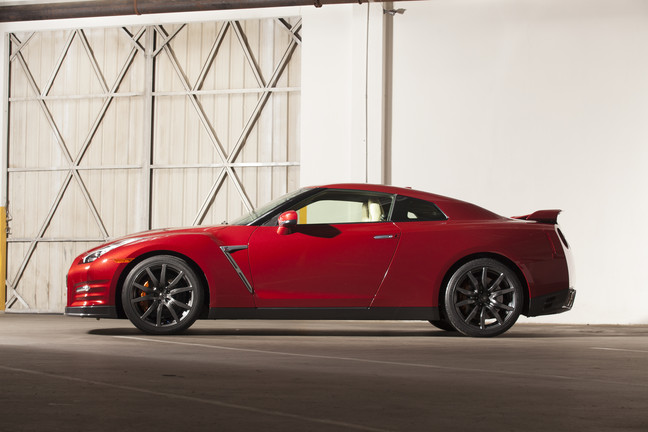 The 2015 Nissan GT-R gets numerous tweaks, including suspension, steering, brake, and tire design, as well as a new 600-horsepower NISMO edition.

The 2015 Nissan GT-R features sharp angles, rounded contours, and crisp edges that not only give it a commanding presence but also help it slip through the air thanks to a low 0.26 drag coefficient. It comes with staggered-width 20-inch aluminum-alloy wheels, a carbon-fiber spoiler on the Black Edition, and a carbon-fiber trunklid on the Track Edition.

Nissan engineers have poured so much love into its handcrafted 2015 Nissan GT-R engines that each features an aluminum plate with the name of its craftsman. This beastly, turbocharged 3.8-liter V6 puts bigger engines to shame with 545 horsepower, 463 pound-feet of torque, and 3.1-second 0-60 mph acceleration. The NISMO edition takes that performance to another universe with 600 hp, 481 lb-ft of torque, and 2.5-second 0-60 acceleration. It’s a very affordable rocket.

Given the supercar nature of the 2015 Nissan GT-R, no one would imagine it to deliver great fuel economy—and it doesn’t. However, it’s not nearly as bad as one might expect from a 545-horsepower monster: 16 mpg in the city, 23 mpg on the highway, and 19 combined is still much better than most cars with comparable engines.

The 2015 Nissan GT-R boasts an interior befitting of its personality. The cabin is truly performance-minded: just sit in the driver’s seat and the first thing you’ll notice is the big red start button, the switches that select ride and handling settings, and the center display showing off every kind of performance data you might ever want. Odds are you won’t notice anything else as soon as you press that red button.

The 2015 Nissan GT-R comes with standard antilock disc brakes, stability control and traction control, front-seat side airbags, and full-length side curtain airbags. It also features a rearview camera and a nifty tire pressure monitoring system that automatically checks to see if your tires are properly inflated.