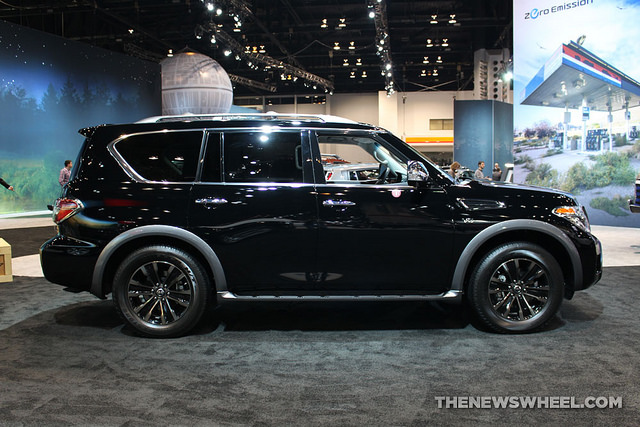 Pulling ahead of more than 300 current or next model-year options, the 2017 Nissan Armada has earned Autotrader’s designation of being a “Must Test Drive” vehicle for 2017.

According to Nissan, the second-generation full size SUV proves itself to be the most powerful and biggest vehicle in its selection of SUV/crossovers; the 2017 Nissan Armada boasts a new 5.6-liter Endurance® V8 engine that pairs with a seven-speed automatic transmission to generate a force of 390 horsepower.

Standing on the shoulders of the Nissan Patrol, the 2017 Armada can seat eight passengers and tow 8,500 pounds in both the four-wheel drive (4WD) and two-wheel drive (2WD) options, when outfitted appropriately. Nissan Navigation with NavTraffic and NavWeather Information, heated front seats, a 130-speaker Bose® audio system, and an eight-inch color display screen are a sampling of the features that come standard on the 2017 Armada.

According to a statement from Nissan, the staff at Autotrader reported, “The redesigned Armada surprised Autotrader editors by just how well it drives and how nimbly it handles for being such a large vehicle, and combined with its high-quality interior materials, features and off-road abilities, the Armada ‘squarely competes with the best’ in the class.”

The 2017 Nissan Armada comes in three trim levels, the SV, SL, and Platinum. Each trim level is available as 2WD or 4WD.