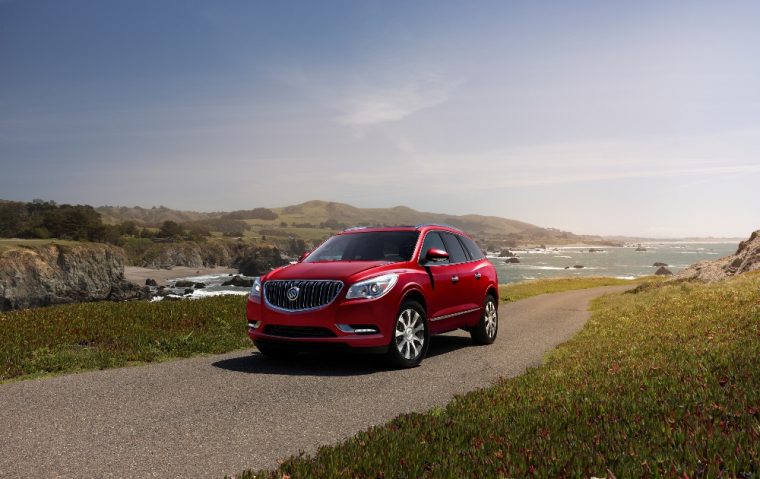 If you thought the Buick Enclave could use a fresh coat of paint, you’re not the only one—GM agrees. Autoblog spy photographers have caught a 2018 Buick Enclave testing “below sea level near Death Valley” while dressed up in heavy camouflage.

Camouflage or not, some details always manage to escape even the best disguises. The iconic waterfall grille suggests that the vehicle is indeed a Buick and not the nearly-identical Chevrolet Traverse. There are five LED daytime running lights that peek through the camo at the front and what seems to be a location for fog lights near the bottom.

More importantly, there are openings in the camo at the front and rear that allow gaps for sensors, which we would think are used for active safety technologies and parking aids.

The next @Buick Enclave spied looking like it’s been put on a diet: https://t.co/MqkUX5y6uM pic.twitter.com/3OYp9tKwse

Like the new GMC Acadia with which it shares a platform, the Buick Enclave has been slimmed down compared to the previous model to help it better compete against midsize crossovers; however, unlike the Acadia, the Enclave is expected to get a stretched version of the platform to accommodate three rows of seating.

We also know that it’ll have some new toys under the hood. The big change of note there is the new 3.6-liter V6 that will be mated to a new nine-speed automatic transmission, though the latter will arrive later down the road, after the Enclave makes it debut as a 2018 model early next year.

The Enclave’s narrower shape does mean that maximum passenger capacity is likely to fall from eight to seven, but also entails a small weight loss. Combined with the new engine and transmission, customers should expect some fuel economy improvements.