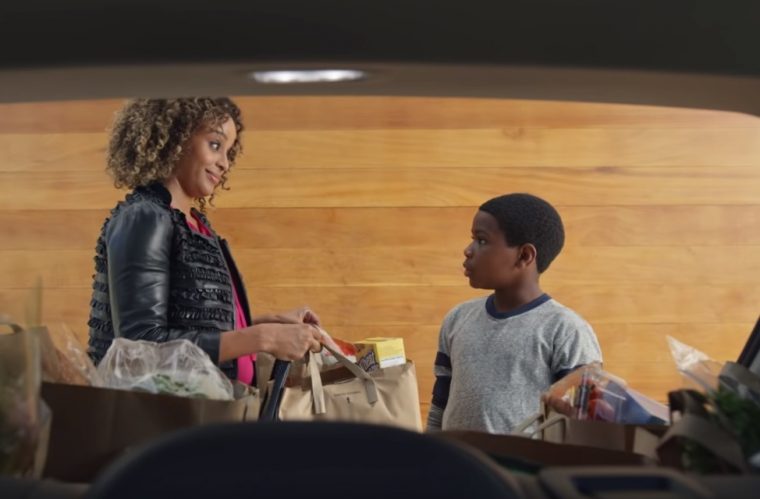 Buick released a new advertisement for the 2019 Buick Envision that makes a run to the store a little less worrisome. It turns out that Buick has the perfect SUV for grocery trips.

Learn More: About the 2019 Buick Envision

In the video below, a mother returns from the grocery store and shows off her new vehicle to her son. She starts with the stuff that appeals most to kids — technology.

Technology that is cool for kids

The luxury SUV comes with built-in 4G LTE Wi-Fi hotspot, which gives its passengers a quick, dependable connection to the information that matters most on seven devices at once. It also includes wireless charging, as you can set your compatible smartphone inside the center console without the use of cords.

After his mom points out these two features, the kid is very happy about the purchase. He is so happy that he probably would give his mother the coolest mom award.

However, the tone of the commercial changes as soon as his mother dramatically says, “Wait ‘til you check out the back.”

Any smart kid could have said that he or she had seen enough, but the boy’s mother had him right where she wanted him because of his curiosity.

Cargo for groceries that put children to work

This is where the mother reveals a child’s worst nightmare, as she opens up the back door with the convenient hands-free power liftgate. Tons of paper bags filled with groceries for the next six months stare back at the son like a monster in a horror film.

Give Yourself Nightmares: When you visit these Minnesota haunted houses

“That’s a lot of groceries,” the boy says robotically.

The mother than cheerfully hands him a couple bags, resulting in a house chore due to the versatility of their new family vehicle.

The son tries what any other kid would do. He offers to walk the family’s dog, which they do not have. With all the money his parents have to buy an Envision, this will probably be next thing to buy on their list.

A new car and groceries in one day seems very daring, but if both the mother and father both work, I’d say it’s highly practical.