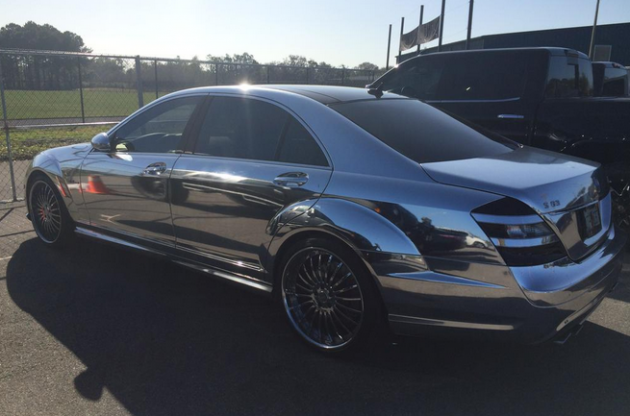 Last season with Cincinnati, right-hander Alfredo Simon went from the Reds bullpen, to the starting rotation, to the All-Star Game. It was an impressive run for the thirty-three year old pitcher, who was traded during the offseason to the Detroit Tigers in exchange for a pair of prospects (shortstop Eugenio Suarez and pitcher Jonathon Crawford).

Detroit fans have since debated whether or not it was a good move for the team, but one thing’s for certain: the trade has brought one more bitchin’ (albeit foreign) car to the Motor City.

Your car, what do you call that color? Alfredo Simon: “Chrome.” pic.twitter.com/uZjFxRNJKl

Yes, that’s a “chrome” Mercedes-Benz S63 AMG, which Simon parked outside of Joker Marchant Stadium in Lakeland, Florida. Simon and his shiny sports car are currently down south for spring training, but both will presumably be travelling north to Detroit when the season begins in April. Apparently, the American League Central Division is a hot-spot for shiny cars: Kansas City Royal’s shortstop Alcides Escobar’s gold Range Rover has also made a spring training appearance.

Now if we can only get our shortstop a Rawlings Gold Glove to put inside his car. pic.twitter.com/XTFScA1nLk — Mike Swanson (@Swanee54) March 3, 2015

It may be kitschy as hell, but we like this trend! If you get paid millions of dollars to play a children’s game, you should spend your money like a 12-year old would.