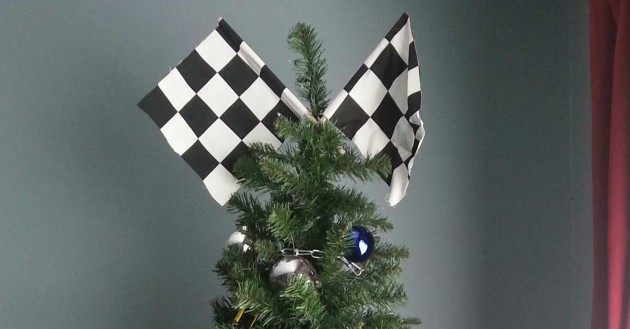 Christmas is fast approaching, but there is still enough time left to get something special for the gearhead or racing fanatic in your life. Not only can you still get free three-day shipping on any orders over $75 from NASCAR.com, but the website is also offering some good discounts and deals on clothing, accessories, and more. We’ve put together a last-minute list of the best gifts for NASCAR fans this Christmas, which lets you know what to get and where to get it. 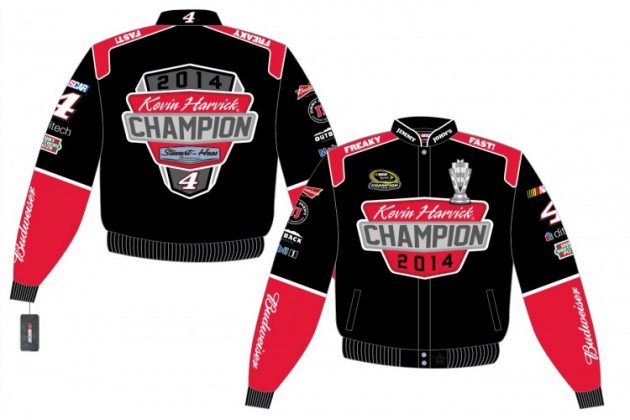 Opening up that sweatshirt from grandma on Christmas morning doesn’t have to be a disappointment. Not if it’s a checkered flag Matt Kenseth sweatshirt, at least.

Right now, all of the cold weather gear on the NASCAR.com superstore is on sale, with some of it marked down by as much as 50%. That includes official jackets, pullovers, wool caps, and more. You can even buy a “Littlest Fan” toddler hoodie for your family’s youngest dyed-in-the-wool NASCAR lover. 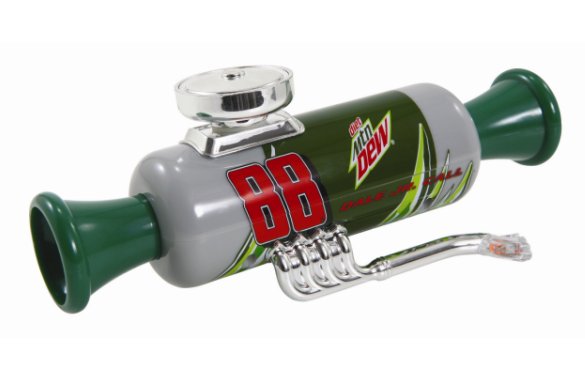 My Dale Call brings all the Dales to the yard

Even though he no longer gets to do Budweiser commercials, Dale Jr. still shows up in the occasional viral marketing campaign. This year, it was this Diet Mountain Dew ad, in which a couple of duck hunters summon Junior by using a “Dale Call,” which makes the sound of a revving engine.

The ad proved so popular that you can now buy an officially licensed Dale Call for just $22.46. This makes a great gift for kids, as well as people who like to bait and hunt Earnhardts. 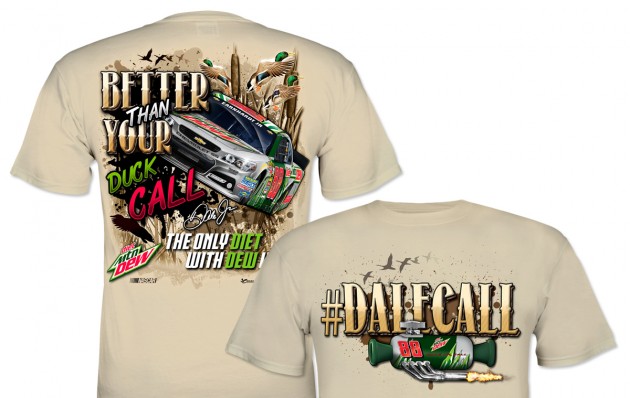 On second thought, those Dale Calls have the potential to be incredibly annoying, especially in the hands of a child. If you’re looking for a gift for your nephew or grandson, go ahead and buy them a Dale Call without worrying about the consequences.  But if you’re a parent who doesn’t want to listen to your son tooting his Dale Call all of the time, maybe you should give him this nice, quiet t-shirt instead. It looks good, and it won’t make constant obnoxious noises that cause you to have harrowing flashbacks to the relentless laughing of Tickle-Me Elmo.

Just be careful where your kid wears this thing – the “Better Than Your Duck Call” logo across the front of the shirt might instigate some fights with die-hard Duck Dynasty fans.

Winter Weather: After a Hard-Working Winter, Pamper Your Car in the Spring 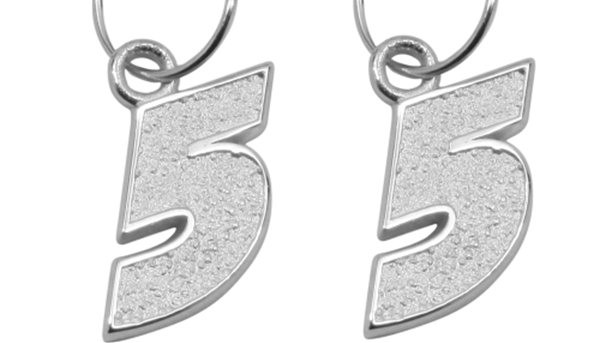 “You’re always on the lookout for the perfect accessory — one that proclaims, ‘#5 is #1!'”

There are a lot of great NASCAR shirts, leggings, and even bangle bracelets on the online store that you can buy for the special woman in your life. There are even some unique “touch” by Alyssa Milano clothing items that she is sure to enjoy. But to show how much you really care, why not give the gift of jewelry?

These Kasey Kahne earrings are sterling silver, made here in America, and currently on sale for $87.16. And since these charms have such a simple design, they can serve multiple purposes. In addition to showing support for Kahne, these earrings could double as a five-year anniversary gift; a tribute to the late Paul Walker, star of the film Fast Five; a promotion for the new Chris Rock movie Top Five – really, whatever you want them to be. Let your imagination run wild.

The Still-Beating Heart of Jeff Gordon 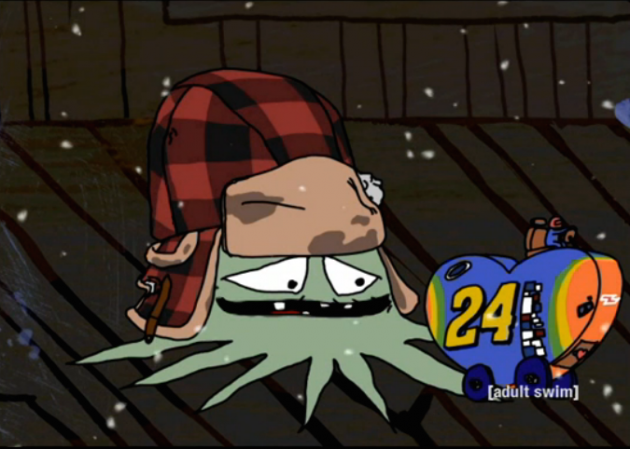 Ok, this one’s not very feasible. In “Christmas Hostage,” a twisted holiday episode of the dark comedy Squidbillies, redneck squid Early Cuyler kidnaps and ransoms jolly old Saint Nick. What are his demands? The same thing he asks for from Santa every year: the still-beating heart of Jeff Gordon (WARNING: video contains somewhat graphic cartoon violence… inflicted upon Santa):

One of Santa’s elves tries (and fails) to appease Early by making him a Jeff Gordon-themed wooden heart with jellybeans inside. Now that’s something you actually could get your loved one this Christmas, thanks to eBay seller x_husbands_things. As you might imagine, she’s selling all of her ex-husband’s things, which includes this collectible heart-shaped Jeff Gordon tin, which can be yours for only $12.99. According to x_husbands_things’ description, this tin did have candy in it at one time, “but the assbag already ate it,” so you’ll have to buy the jellybeans separately.

Tickets to the Daytona 500 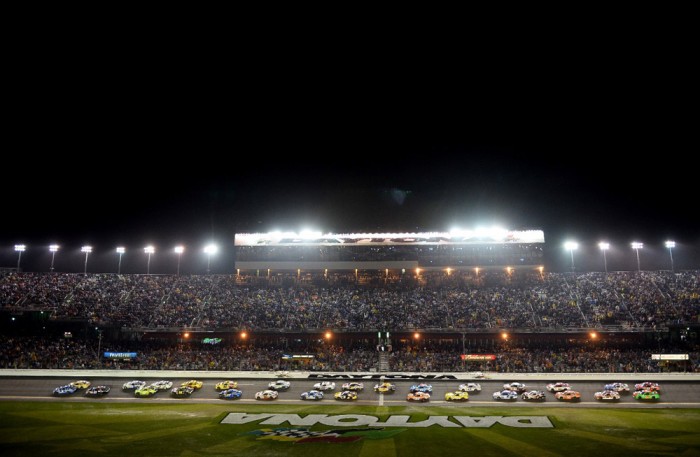 The 2015 Daytona 500 will be held on Sunday, February 22nd, and tickets are available now

There’s nothing like actually being there for yourself and seeing the blur of a car speeding by at over 200 mph, hearing the roar of the engine, and paying $8 for a light beer (actually, to their credit, concession costs are comparable to other big sporting events and they let you bring in your own cooler of beer, as long as it’s in a can). If you know someone who has only ever experienced NASCAR from the tame comfort of their own living room, give them an unforgettable experience this year with tickets to a race. The biggest and best of the season is the Daytona 500, and tickets for that are already available on Stubhub.com, starting as low as $89.

If you still haven’t found what you’re looking for, check out our other list of perfect gifts for NASCAR fans.