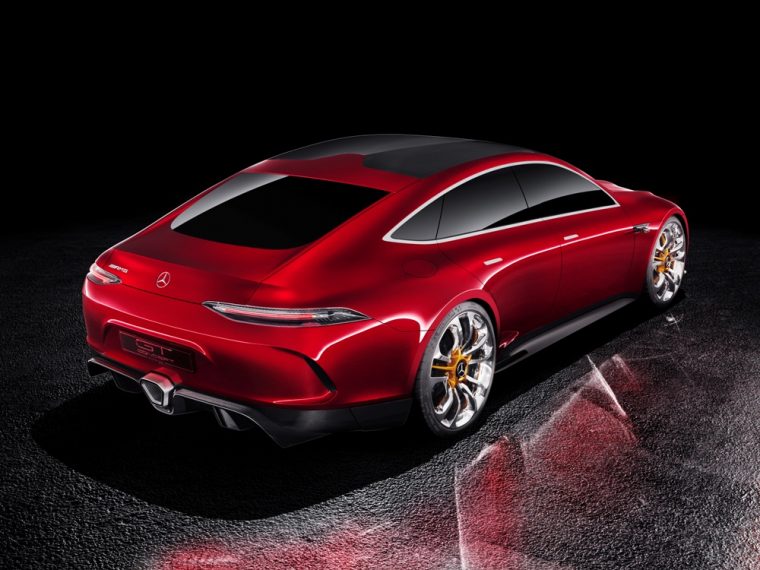 Mercedes-Benz celebrated the 50th anniversary of its Mercedes-AMG performance division by unveiling the new Mercedes-AMG GT Concept at the 2017 Geneva International Motor Show.

While this model may just look like a four-door version of the Mercedes-AMG GT coupe from the outside, if you take a look underneath the hood you’ll see a preview of AMG’s new hybrid powertrain.

The new Mercedes-AMG GT Concept features the same 4.0-liter biturbo V8 engine that can be found in the AMG GT coupe and roadster, but the concept gets an additional electric motor that boosts horsepower all the way up to 805 ponies. What’s more, the Mercedes-AMG GT Concept comes with 4Matic+ all-wheel drive and can be driven in all-electric, hybrid mode, and pure combustion mode.

Visitors at the Geneva Motor Show will also notice an “EQ Power+” badge on the exterior of the Mercedes-AMG GT Concept. This new badge will be featured on each new Mercedes-AMG model equipped with a hybrid powertrain.

The Mercedes-AMG GT Concept also does away with any side mirrors; instead, it comes equipped with an innovative rearview camera system. Some other notable features found on this concept include a carbon-fiber splitter, a single central exhaust pipe, and a new Panamericana grille, which is highlighted by vertical slats adorned with red accents.

“The AMG GT Concept embodies the most extreme expression of our design idiom and underlines the autonomous profile of AMG as a performance brand,” said Gorden Wagener, Chief Design Officer, Daimler AG. “Through ideal proportions it creates a pure design with emphasis on its surfaces, featuring sensuous shapes, and is hot and cool at the same time.”

A production version of the Mercedes-AMG GT Concept, which will take aim at the second-generation Porsche Panamera, is expected to be released in 2018.

Video: Take A Closer Look at the Mercedes-AMG GT Concept