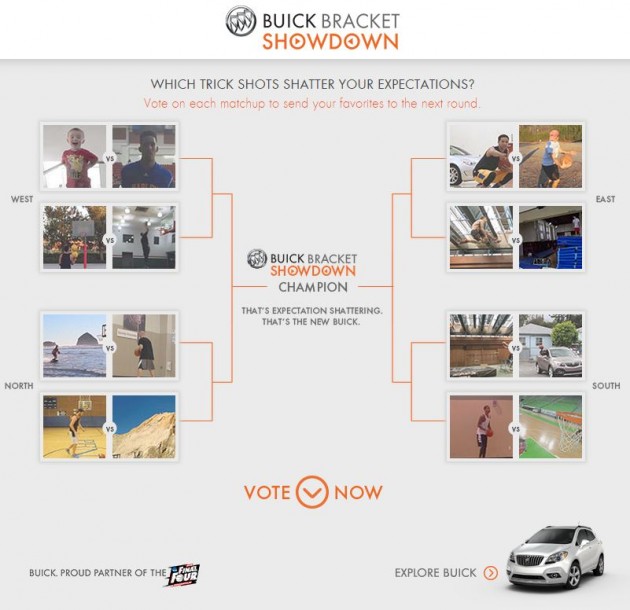 For the fifth year in a row, Buick will serve as the primary automotive sponsor of the NCAA Men’s Basketball Tournament (you’re probably seeing that tri-shield on the bracket that you’re filling out at this very minute), and the automaker is celebrating by putting together a bracket of its own.

More from Buick: Backup Camera Systems to Become Standard for All 2015 Buicks

The matchups are all fairly even, hence why there’s no seed number for each entrant. In the West, a little boy named Titus goes up against an honest-to-god Globetrotter and currently holds 68% of the vote. (Seriously, his shot is impressive, and he’s a cutie-patootie.)

In the North, a man named “Snake” does a through-the-legs-behind-the-back free throw shot that looks just as good as the entrant from Jambroz, the delightful young fellas who hit it big a couple of years back with the most epic of pool dunks.

Arguably the biggest upset of the bracket comes out of the West Region, where Kalani’s multi-ball-spinning antics have him beating “The Greek Freak” Giannis Antetokounmpo, who throws down a monstrous dunk so sick that even anti-vaxxers are getting immunized against it.

There are a lot of really great long-range shots and monster dunks here, but Giannis wins. Guys. Seriously. Giannis Antetokounmpo.

Check out the full lineup of contestants at www.buick.com/bracket/. Stay tuned to see who advances when the next round begins March 27th. Also, vote for Giannis.