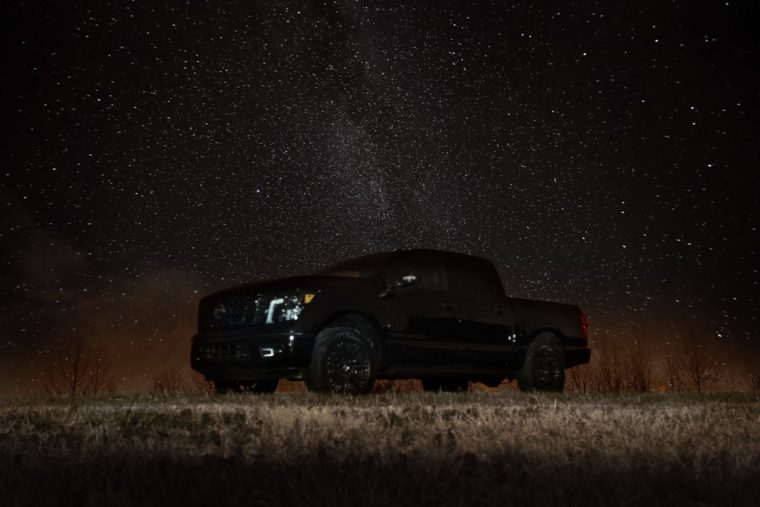 For the solar eclipse earlier this year, Nissan celebrated by announcing that the popular Nissan Midnight Edition appearance package was coming to its truck lineup. To celebrate the winter solstice, the darkest day of the year, Nissan followed up that announcement with the news that the 2018 Nissan Titan and Titan XD with the package is now on sale.

The text Nissan used in the announcement was pretty witty, noting that the trucks with the packages were on sale in “well-lit Nissan dealerships nationwide”. That’s a fair thing to say, considering that the photo released is so dark it’s hard to make out the black truck (Is it the Titan? The Titan XD?) against the starry night sky.

In case you haven’t heard, the Nissan Midnight packages effectively “murder out” a production Nissan vehicle, or darken its accent chrome, grill, and wheels. In the case of the Nissan Titan, the package includes these decorative features:

This particular appearance package was first introduced on the Maxima SR, but once the package was added to about 75% of Maxima models, the automaker expanded it to other vehicles. At the 2016 Chicago Auto Show, Nissan announced that five additional models would be eligible for the upgrade: The Murano, Pathfinder, Rogue, Sentra, and Altima. Nissan reports that the package costs about half of the price of adding each specialty piece to the vehicles one by one.

If you’re interested in a seriously cool truck, you go talk to your local Nissan dealer soon before they’re all gone.