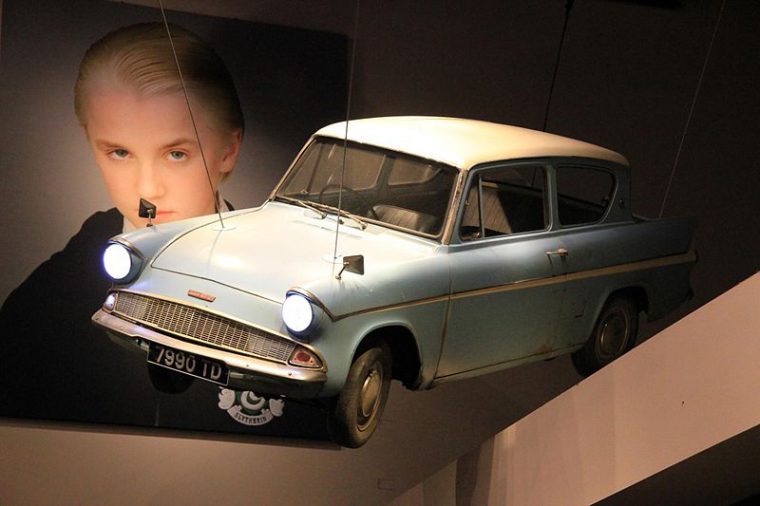 While many Harry Potter-related celebrations tend to happen near July 31st (Harry’s birthday), quite a few of the films based on the famous wizard’s life were released in November, including Harry Potter and the Chamber of Secrets, which was released 15 years ago today.

In the very beginning of the film, a certain flying vehicle appeared and forever stuck with Potterheads throughout the years—the Weasleys’ light blue 1962 Ford Anglia. It was the vehicle that helped saved Harry from his aunt and uncle, allowing him to return to Hogwarts for another year.

Once Fred, George, Ron, and Harry return to the Burrow, matriarch Molly berates them for dangerously flying to Surrey and back in the enchanted vehicle. The boys’ father, Arthur, initially can’t contain his excitement about the venture but eventually—because of Molly staring him down—tells them that it was a very bad thing they did.

The Anglia gets Ron and Harry into trouble not long after this, when the Weasleys and Harry are on their way to Platform 9 ¾. Somehow, the gateway to the platform had sealed itself (thanks, Dobby) and the boys were left with no other choice but to drive the flying car and try to find the train. Of course, being just 12 years old, they didn’t think about muggles seeing the car and finally turned on the invisibility switch whilst flying mid-air. It wasn’t a smooth ride to Hogwarts, but the duo did finally make it to the grounds.

My wand. Look at my wand…

Once at the magical school, the car takes on a life of its own after landing in the branches of the historic Whomping Willow. After launching Harry, Ron, and Hedwig out of the cabin, the Anglia scurries off into the Forbidden Forest.

Because of the damage they inflicted on the tree, as well as being seen by no less than seven muggles, the boys were absolutely berated by Professor Snape. Fortunately, the more understanding Professor McGonagall stepped in and allowed the boys to head to the Great Hall, but not without the pair of them receiving detention and a letter sent home to their guardians.

RONALD WEASLEY! How DARE you steal that car!

That letter, of course, leads to Ron receiving a howler from his mother, opened in front of his classmates in the Great Hall.

It isn’t until a bit later in the film when we see the Ford Anglia again, when Hagrid’s former pet spider Aragog sets his family on Ron and Harry. The Anglia must have some sort of allegiance to the Weasley family, as it appears and opens its doors to Harry and Ron, allowing them to escape the treacherous creatures that were chasing them.

The car featured in the second film of the franchise has made quite an impact on fans. One person went as far to create an Anglia mod for the video game Grand Theft Auto, while someone else got the iconic vehicle tattooed on them forever. Even One Direction-turned-solo artist Liam Payne bought a replica of the vehicle and placed it in his garden at his home.

Duplicates of the car can be seen at various locations, including the Warner Brothers Studio Tour in London, England, and both Wizarding World of Harry Potter locations at Universal Studios in Hollywood, California, and Orlando, Florida. 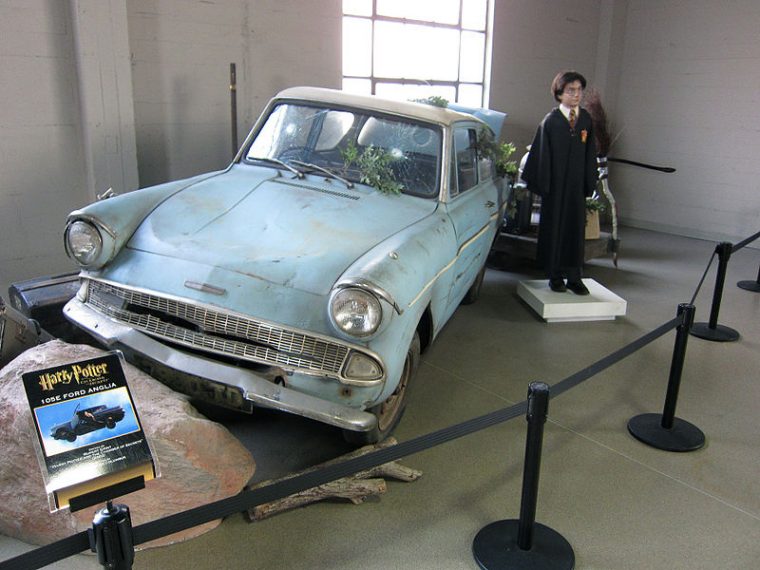