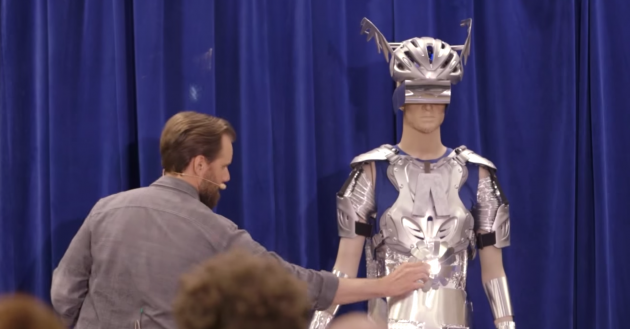 Chevrolet must really be excited for the upcoming Batman v Superman film.

First the bowtie brand trademarked the name “Camaro Krypton,” and now it’s once again invoking Man of Steel imagery with a superhero of its own: Almighty Aluminum Man.

Trucks: A Few Helpful Tips for Towing a Trailer

The ad is mocking the 2015 Chevy Silverado’s chief rival arch-nemesis, the Ford F-150, which features an all-new aluminum body. Although the F-150’s lightweight architecture has improved the vehicle’s fuel efficiency, Chevrolet thinks that in doing so, Ford has sacrificed the strength and dependability that drivers get from high-strength steel.

In another ad, a group of men are asked to decide between hiding from a 700 lb grizzly bear inside an aluminum cage versus one made of steel:

Chevrolet has a point: aluminum is more expensive than steel, and according to research done by AMCI Testing, repairing a damaged aluminum F-150 costs an additional $1,755 and takes 34 days longer, on average, in comparison to fixing the same damage on a steel Silverado.

However, it’s the kind of stance that could come back to bite Chevy. After all, the Silverado’s hood is made of aluminum, and industry experts expect GM to slap aluminum doors and liftgates onto the next-generation pickup, which could arrive as early as 2018.

Still, we really like the one comic book fan’s point about how Chevy’s tongue-in-cheek superhero concept pales in comparison to “Zinc Man.” Is there some way we can get that character into the next Avengers film?