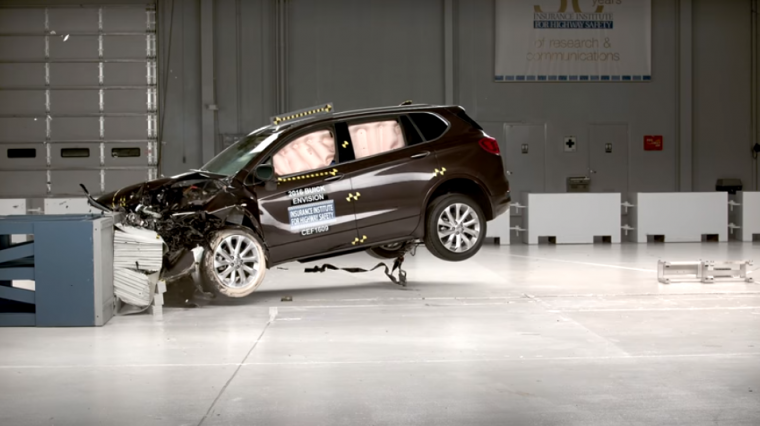 When GM announced last year that the Buick Envision would be built in China and then shipped to the United States, some media outlets, as well as a few labor unions, panned the move. However, the Chinese workforce may have proved their credentials recently as the Envision crossover earned a Top Safety Pick+ rating from the IIHS, which is the highest honor that’s given by the US non-profit organization.

This rating applies to both 2016 and 2017 versions of the Buick Envision. Furthermore, the Envision is the first vehicle ever to be tested by the IIHS as part of its consumer ratings that was built exclusively in China.

To earn Top Safety Pick+ distinction, the new Buick Envision had to earn “Good” ratings in each of the five major crash tests performed by the IIHS. Those tests are the roof strength, side crash, head restraint tests, moderate overlap front, and small overlap front. In addition, to earn the “+” rating on top of being a Top Safety Pick, a vehicle must earn an “Advanced” or “Superior” score in the front crash prevention category. The Envision was given an “Advanced” ranking thanks to its available front automatic braking feature.

In fact, when the Envision was equipped with front automatic braking, it was able to avoid a collision all together at 12 mph. Furthermore, the crossover reduced its impact speed by 9 mph when put through the paces in the 25 mph high-speed autobrake test.

The IIHS also scored the Envision’s forward collision alert safety technology, which earned a “Basic” rating. This safety feature is standard on all 2016 Envision’s that don’t come with front automatic braking, but it’s just optional on 2017 models.

The one department where the Buick Envision didn’t receive top ratings was for its child seat attachment (LATCH) equipment, which only earned a “Marginal” rating.

The 2017 Buick Envision is the second GM model in as many weeks to earn top honors from the IIHS, as the 2017 Cadillac XT5 was also named a Top Safety Pick+.

Have You Heard? The redesigned GMC Acadia has shaved off 700 pounds for the 2017 model year