Earnhardt’s No. 3 Car Returning to NASCAR 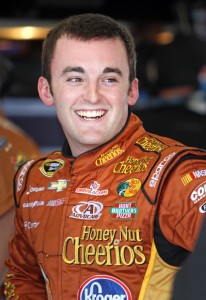 It has been nearly 13 years since that fateful day that Dale Earnhardt, Sr. was killed during the final laps of the 2001 Daytona 500, yet the spirit of the dogged racer still lives on for all of those attached to the sport. No racer ever expects to fill the accomplished (and controversial) shoes of Earnhardt, Sr., but nevertheless, rookie driver, Austin Dillon, joining Richard Childress Racing, will be the first to bear the number 3 on his car since the tragic death, to a large portion of racing fans’ dissatisfaction.

Austin Dillon is no stranger to racing. He is a champion in the NASCAR Nationwide Series as well as the NASCAR Camping World Truck Series. The racer has undoubtedly proven himself worthy of the big boys as he prepares for the 2014 NASCAR Sprint Cup Series.

Dillon is also no stranger to the number 3 car. His own car sported the number 3 in both the Nationwide Series and Camping World Truck Series. The driver whom Dillon will replace, however (Kevin Harvick, who was Earnhardt’s successor), had been sporting the number 29 ever since he took to the track.

For those of you fans who worry about Earnhardt’s No. 3 car returning to the sport, you may find some comfort in the fact that neither of the two paint schemes for Dillon’s car will resemble the Goodwrench design so famously attached to Dale. Instead, the designs of both versions of Dillon’s Chevy SS (the Cheerios-sponsored SS and the Dow-sponsored SS) will take on new life, perhaps symbolizing the final steps of for NASCAR fans to let go and be at peace with The Intimidator’s passing.

What do you think of Earnhardt’s No. 3 car returning to NASCAR? Are you for or against this move? Let us know in the comments below!