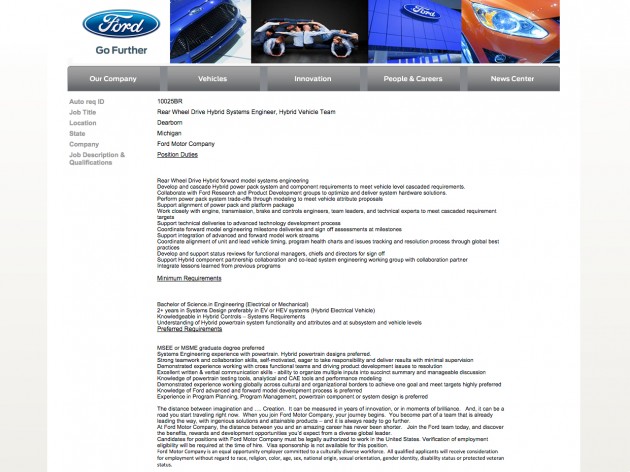 Hey, guess what? It looks like Ford is scouting for a Rear Wheel Drive Hybrid Systems Engineer, according to a posting on LinkedIn. While it’s not necessarily all news—Ford stated in July 2013 that they were developing a RWD hybrid system for trucks and SUVs—it begs an important question nonetheless: could it mean that we’ll be seeing a hybrid Mustang before too long?

While the news from more than a year ago certainly informs the likely intended use for a RWD Hybrid system—likely for a future iteration of the F-150—it could, as Jalopnik’s Andrew P. Collins notes, be mashed into a FWD Edge or Explorer for a hybrid AWD vehicle.

There is, of course, the notion of a hybrid Mustang, which was the subject of much rumbling shortly after the early December 2013 reveal of the 2015 model. Whether a hybrid Mustang is something that customers would want remains to be seen, but it could go a long way toward earning Ford a lot of customers who may be looking for something more sophisticated than a Prius and less expensive than a BMW i8.

This is exciting news in either case because it (most likely) means that the aluminum-bodied F-150 will be made even more efficient than any of its competitors through an available hybrid option. It’s hard not to hope that the development of the platform will, at the very least, result in a case study/auto show concept version of a greener Mustang.