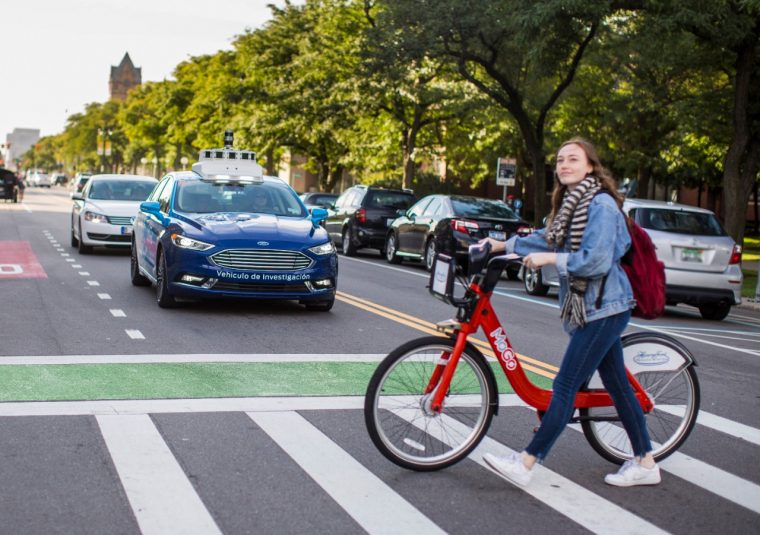 In a post on Medium Tuesday, John Shutko, technical specialist for Human Factors and UI Design at Ford Motor Company, issued a call on his company’s behalf for a universal language for autonomous vehicles.

“The idea that pedestrians, cyclists, and scooter users should change their behavior to accommodate self-driving cars couldn’t be further from our vision of how this technology should be integrated,” writes Shutko. “It’s why we’ve been hard at work developing an interface we believe will help self-driving vehicles seamlessly integrate with other road users.”

Shutko invited other automakers working on SAE level 4 autonomous vehicles to collaborate with Ford to create a standardized method for self-driving vehicles to communicate their intent. This would include shared means of signaling that a vehicle is driving, yielding, and accelerating from a stop. As a step in this direction, Ford opened up the work that it has already achieved to other companies via a Memorandum of Understanding.

One of Ford’s most notable studies in this respect was a trial conducted last year with the Virginia Tech Transportation Institute. Rather than test an actual autonomous vehicle, Ford dressed up a driver like the seat of a Ford Transit Connect. The vehicle was equipped with a light bar mounted over the windshield, and the intention behind the study was to prove the learnability to the signals for yielding, active driving, and start-to-go.

“The VTTI team cataloged all the footage and found that the light signal interface did not encourage any unsafe behavior by other road users,” writes Shutko. “The results prove there is a baseline for us to build from in terms of the potential to improve acceptance of self-driving vehicles and trust in the technology.”

Shutko says that Ford will put these and other findings to a live trial as part of its Miami-Dade County autonomous testing fleet. The final objective with open collaboration will be to reach an industry-wide agreement with respect to the placement, design, and color of the signals.