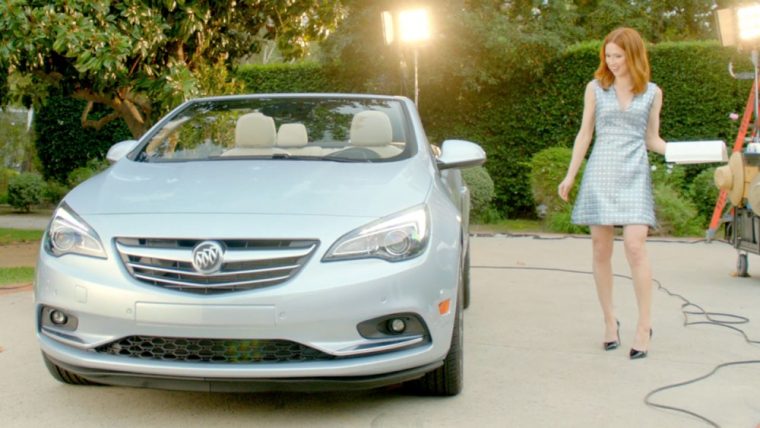 Actress Ellie Kemper may be best known for her roles in The Office, 21 Jump Street, and the Unbreakable Kimmy Schmidt, but her performance in the new Buick Cascada commercial might be her funniest yet.

New GM Models: Check out all of the Cascada’s exciting tech features

The commercial begins with Kemper standing next to the new Buick Cascada, while texting on her phone, when a man appears and says, “Wow, even better looking than on TV.”

Kemper is initially disgusted by the comment, until she looks up and decides the man is handsome; so she thanks him for the nice words.

The guy then explains he was actually referring to the new Cascada, but then saves himself by telling her that she looks so good standing next to the luxury vehicle that she could be its spokesperson.

The commercial goes on to show the funny actress imagining herself as Buick’s spokesperson, while she flirts with the handsome gentleman throughout the three-minute YouTube movie.

The new digital-only advertisement comes on the heels of Buick’s big announcement that it will air its first-ever Super Bowl commercial during next month’s game.

The campaign was created by DigitasLBI. Besides the three-minute movie, there are several 30-second vignettes, which show Kemper exploring different elements of the Cascada, such as its convertible roof and heated steering wheel.

“Our Ellie Kemper series invites viewers to join her in discovering the new Cascada and today’s modern, approachable Buick brand,” said Duncan Aldred, U.S. vice president of Buick and GMC Sales, service and marketing. “This innovative digital-only campaign is another example of how Buick surprises consumers and reach audiences in exciting new ways.”

Cars 101: Do you know the technical differences that distinguish coupes from sedans?