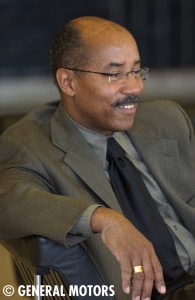 Have you ever been to a high school basketball game when the opposing student bodies were entrenched in a heated chant battle?  Maybe the student body has even chanted, “NOT YOUR RIVALS!” to a swarm of students who apparently took the contest more seriously than they did.

That is essentially what GM Vice President of Global Design, Ed Welburn, said to The Lincoln Motor Company, except instead of yelling it across the hardwood, he said it (we assume at a reasonable volume) in an interview with Car and Driver.

Did Welburn really just take a shot at Lincoln so publicly? Kind of sounds like it.  Perhaps this has to do with GM’s new European strategy, which involves bolstering its Cadillac offerings across the pond.  Either way it’ll be interesting to see who’s storming the metaphorical court when sales figures are released.

Do you agree that Lincoln and Cadillac are not competitors?  Share your opinion in the comments below.