Hey America, This is (Probably) Your 2017 Buick Verano 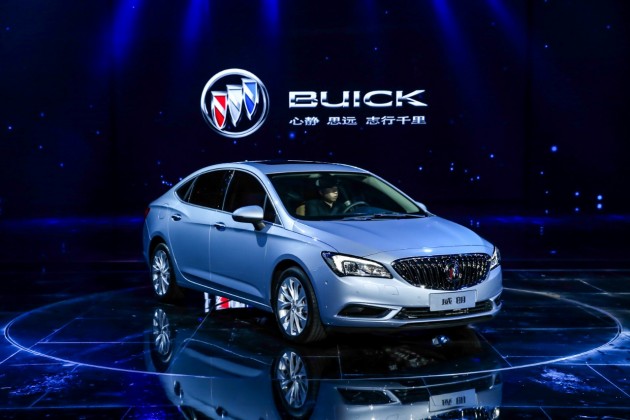 The next-generation Buick Verano made its long-awaited debut during Shanghai GM Gala Night ahead of the 2015 Shanghai Motor Show. The new Verano—dubbed Wei Lang for China—takes a bold step in a dynamic new direction that distinguishes Buick’s mid-size sedan from the rest of the heap. It’s also the very same Verano—more likely than not—that Buick will be bringing to America in the near future.

The best part by far? The return of the red, white, and blue tri-shield badge. O joy!

More from Buick: Buick’s 2015 Models Make It Possible to Stay Safely Connected on the Go

The 2017 Buick Verano bears signs of its influence, carrying over cues from the 2013 Riviera Concept and the 2015 Avenir Concept that debuted at the 2015 North American International Auto Show earlier this year. The biggest effects can be seen in the new Verano’s Avenir-styled wing-shaped HID xenon headlights and LED daytime running lights, as well as the wing-shaped LED taillamps.  The double-sweep beltline, a characteristic of Buick’s sedans, is also greatly improve for a look that stands out even more than its predecessor.

The Verano/Wei Lang is powered by the 1.5-liter SIDI turbo engine that generates 166 horsepower while using standard start-stop and the vehicles’ wind drag coefficient to set a new fuel economy benchmark for the segment.

The Wei Lang joins the new Excelle, Excelle GT, and Envision in Buick’s quest to become the number one brand in all of China. It is as-yet unknown if the Wei Lang will eventually make the trek stateside as our next-gen Verano, but there’s no reason to think that GM would move in any different direction. Just make sure you bring that beautiful badge along with it.