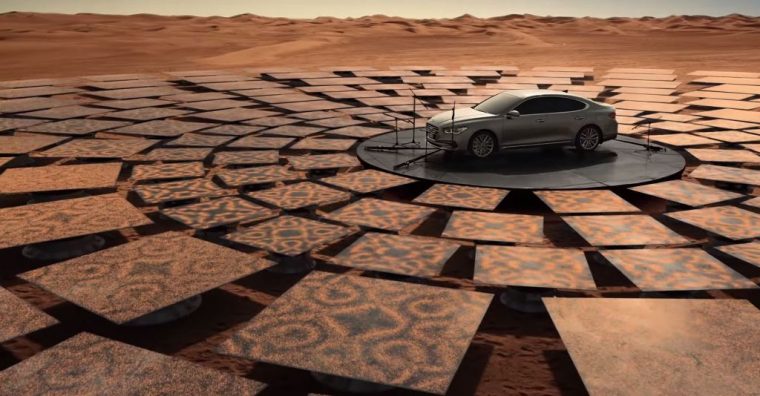 In many ways, vehicles are like poetry in motion. Designed to be both appealing in appearance and mobility, cars of all types are precise constructs of artists and engineers. But, have you ever considered the sounds of automobiles to be poetic too?

Using the all-new Azera sedan, Hyundai translated the sounds of a vehicle engine into artistic visual patterns. How was this achieved? Watch the video below to find out!

Employing a technique known as cymatics, sound frequencies can influence the organization of particles, moving them in certain ways at certain frequencies. The easiest way to see this in practice, as Hyundai did, is to broadcast the sound across a platform covered in granules of salt, sand, rice, or such.

In this experiment, Hyundai put the Azera in a sound booth with strategically placed microphones that captured the sound of the running V6 engine and translated it into vibrating cymatic patterns. As explained by Hyundai, “As RPM of the all new Azera’s 3.5-liter engine goes up, higher sound frequencies are created, forming more complex patterns as it reaches 286 horsepower.”

Not satisfied with performing the experiment on a small scale, Hyundai took the experience outdoors and amplified it–literally. With the Azera in the center of a circle of a hundred platforms covered in sand, resulting in a kaleidoscope-like spectacle you’ve probably never seen done elsewhere.

While this stunt may only interest people audiophiles, it’s certainly a unique way to promote the Azera’s capabilities.

Conquering the Hybrid Market: How the new Hyundai Ioniq is attracting new customers