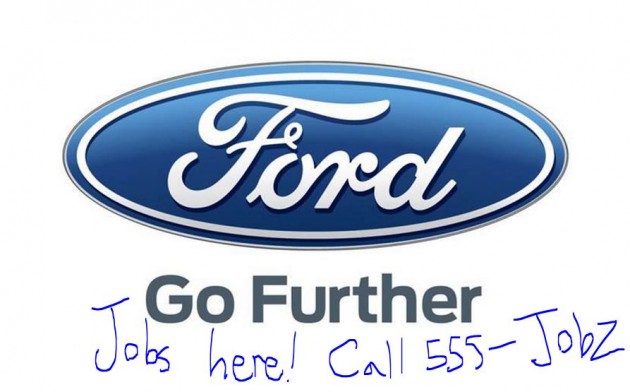 If someone in your Facebook feed has posted something allegedly touting Ford Motor Company hiring for positions starting at $18 an hour and providing the number for a recruitment line, then you might want to play Bad News Barrett and deliver an unfortunate missive.

This post, like the story of John Cena’s death, the 2016 Lincoln Continental, and the 200-mile Ford EV, is total bullhonky.

According to Freep, Ford reached out to clarify that this post is “not genuine” and not the result of anything put forth by anyone affiliated with the automaker. The provided number, bearing a 734 area code indicative of a Michigan location, was traced back to workforce developer Ross Innovative Employment Solutions. Ross spokesman Brad Speck said that RIES has done hiring referrals for Ford in the past, and that the whole thing is likely some great big mistake.

Shopping for a New Ford? Check Out the Benefits of Ford Credit

Upon calling the number, you are greeted by an outgoing message that identifies the number you have called as the “Ford recruitment line,” which doesn’t seem at all unintentional. Callers are told to leave their name and number and to indicate whether they are veterans and if they are currently employed.

“What we assumed happened is someone took a little information, got it wrong and promoted ‘we are hiring’ directly for Ford,” said Speck. “Or to be honest, we’re not certain it’s not something malicious.”

Employment scams are not terribly uncommon these days, with more than 18,000 incidents reported in 2014 alone.

“If you’re really in the market for employment and perhaps you’ve been out of a job for quite some time, you’re really driven to get a job,” said Melanie Duquesnel, president and CEO of the local Better Business Bureau. “The underpinning is you need the money to pay your bills. People want to be employed.”

Need a Quick Quote? Get a Credit Score Estimate from Black Books