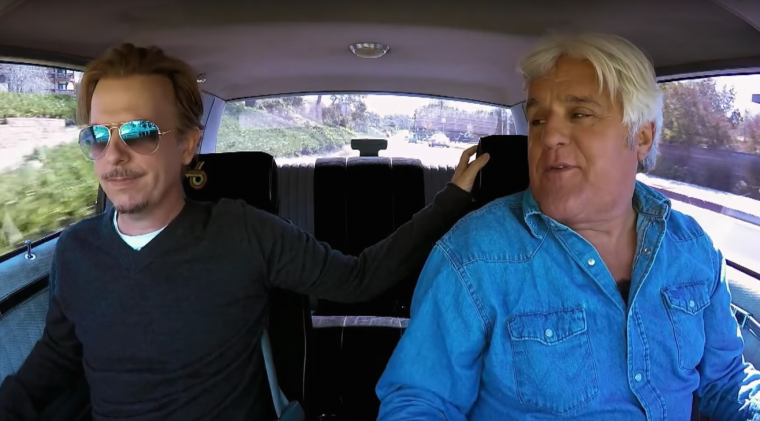 If there is one thing that Jay Leno’s Garage has taught us, it’s that a lot of stand-up comics are car guys.

In addition to the host’s own well-documented obsession with all things motorized, the show has featured quite a few comedians in cars (though, perhaps to avoid copyright infringement, they’re never shown getting coffee). So far, Leno has raced Tim Allen, driven Joe Rogan’s 1965 Corvette, and mocked Jeff Dunham’s AMC Gremlin collection.

And now David Spade, fresh off of roasting Rob Lowe, becomes the latest comic to appear on Leno’s show. Take a look:

Spade talks about how his automotive enthusiasm was born out of making the white trashterpiece Joe Dirt (so apparently something positive did come out of that movie, after all). Spade credits/blames the film for his decision to spend $900,000 on a Dodge Daytona at a Barrett-Jackson auction, which he now lives in fear of crashing.

But the car he drove to the comedy club is a 1987 Buick Grand National. Spade bought his after being impressed by Sean Penn’s, and between the broken(?) antenna and chipped rear fender, it doesn’t look like much when parked on the street. But once Leno gets behind the wheel, he shows off this sleeper’s true power.

At the end, Leno summarizes the car as being, much like Spade, “unpretentious but kind of cool.” It’s a nice sentiment, but he’d better be careful comparing comics to certain models of cars… that’s sort of crossing over into Comedians in Cars Getting Coffee territory again…