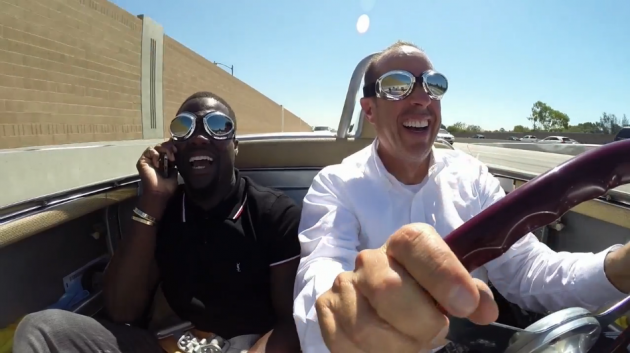 In case you haven’t heard, roughly one bajillion leaked Sony emails have been made public, with some people actually speculating that the hacking was done by Kim Jong Un’s North Korean regime in retaliation for The Interview, that movie where Seth Rogen and James Franco try to kill him. (And according to some of the leaked emails/the movie’s very mediocre-looking trailer, the buddy comedy isn’t even funny enough to warrant all of the trouble it may have caused).

While most of the leaked Sony emails have been rather embarrassing for the company (higher-ups calling Angelina Jolie a “minimally talented spoiled brat” and complaining about having to make “mundane, formulaic Adam Sandler films”), a few of them seem to paint the folks at Sony in a positive light (actually, hating Adam Sandler also makes them seem like good people). Case in point: this email exchange in which Jerry Seinfeld helps build a 1970 Volkswagen Bus with a Porsche 911 engine for one of the execs at Sony. The conversation begins with Sony Pictures Television President Steve Mosko asking Jerry this question:

Is it true you can put a Porsche engine in place of existing 75 hp engine? Easy fit? Can’t believe I’m asking this question

Jerry, who is an avid Porsche aficionado and collector, was then more than willing to help build such a Frankenbus:

You better believe it sweet cheeks! Let’s get it on!

I put a Porsche engine in a ’65 VW Bus in 2004 and drove it from Santa Monica to Massapequa Diner on L.I. with three guys I went to High School with.

Jerry apparently thought the idea was so awesome (!!!) that he went ahead and arranged for the Porsche engine transplant to be done by Russell Ludwig, owner of Old Speed in Paramount, California. Steve then challenged Jerry to a race in his newly outfitted VW van, and even suggested the whole thing would make for a good documentary series:

>> 1970. Mint condition. Have a Porsche 911 engine going in as we speak!!!! Let’s race. I could do a documentary on all the wonderful stories complete strangers tell me about their amazing memories …love it. Steve

According to another leaked email, Steve really loves it. Like, in the way that Roger Taylor of Queen loved his Alfa Romeo:

Is it weird that this excites me more than sex. ? I’m speechless jerry. Thank you….Steve.

Well, uh, it’s a little strange, Steve. Actually, the entire conversation feels a little sexual, between Steve’s “this excites me more than sex” comment and Jerry’s own “You better believe it sweet cheeks! Let’s get it on!” When examining the subtext of these leaked Sony emails, one gets the impression that Jerry and Steve are on the verge of making their bromance physical…