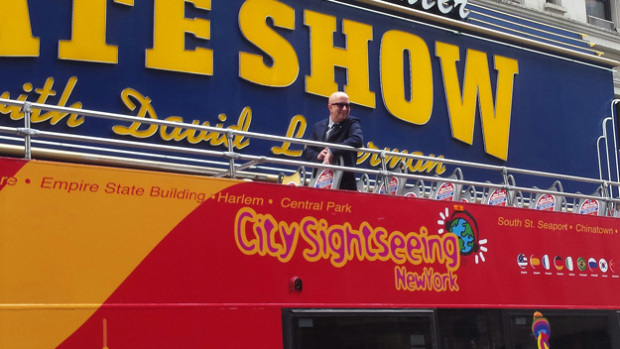 Retiring Late Show host David Letterman’s legendary career is coming to an end this month, with his final episode set to air on May 20th. Letterman’s been getting many (well-deserved) plaudits for his lengthy and influential tenure as a late night comedian… but what about the guy who’s been laughing too hard at all his jokes the whole time? Doesn’t he deserve some recognition, too?

Of course he does, which is why we’re happy to hear that Canadian-born musician and noted sunglasses enthusiast Paul Shaffer is being honored with an induction into the “Ride of Fame.” A New York City Gray Line sightseeing bus has been dedicated in his honor, with images of the iconic piano player decorating the vehicle’s exterior and one of its seats.

“See where we are now — we’re on a double-decker bus, and I was inducted into the Ride of Fame,” an excited Shaffer said while touring the bus with WCBS 880’s Marla Diamond. “We’re going to take a magic bus ride. We’re on the open floor, and we’re right by the marquee of the Late Show, and it says, ‘featuring Paul Shaffer and the CBS Orchestra.’ This may be my favorite moment right now.” 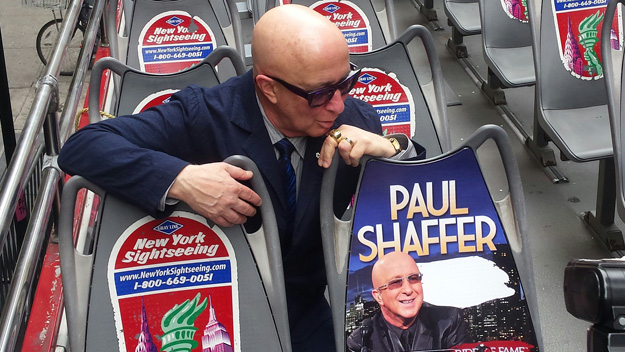 “People can sit on me whenever they feel like it’s necessary,” Shaffer joked
Photo credit: Marla Diamond/WCBS 880

For the last 33 years, Paul Shaffer has been David Letterman’s bandleader and sidekick—first with “The World’s Most Dangerous Band” on NBC’s Late Night (1982-1993), and then with the “CBS Orchestra” on the Late Show from 1993 until today.

Before working with Letterman, Shaffer was a part of another venerable NYC-based late night television institution, as a member of Saturday Night Live’s house band from 1975 to 1980. He also frequently acted as the musical director for The Blues Brothers, and later had a cameo role in Blues Brothers 2000 (the less said about that film, the better).

Of course, even if he’d never done any of that, Shaffer would still deserve his own double decker bus, just for his immeasurable contributions to popular music as the writer of “It’s Raining Men.”

And now, because it’s tangentially related, here are David Letterman’s “Top 10 Rejected Titles for the Movie Speed,” all the way from 1994:

8. Honey, I Drove the Kids Really Fast on a Bus

7. Faster, Bob Barker is Chasing Us!

6. Creepy Guy in the Window

5. Debbie Does Greyhound (Times Square Only)