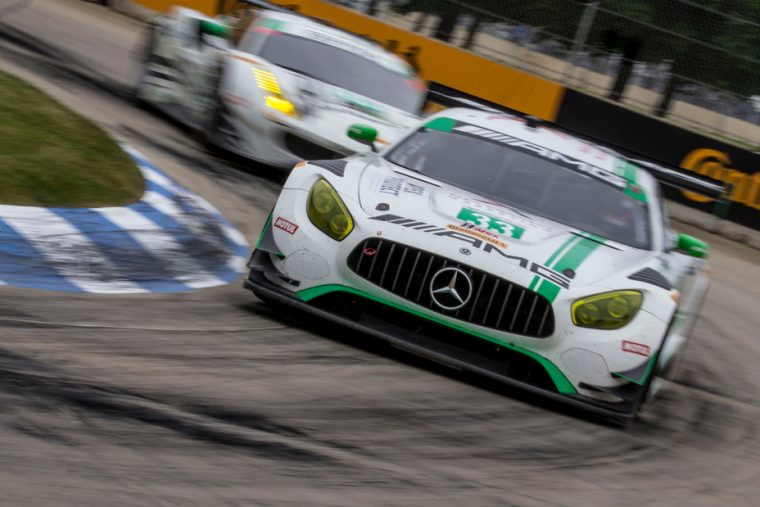 Mercedes-AMG teams had a strong showing at the IMSA WeatherTech SportsCar race at the Detroit Grand Prix, with its two teams finishing fourth and eighth on Saturday.

This marks the third WeatherTech Championship GTD race where Keating, Bleekemolen, and the No. 33 team have finished fourth or better. Currently, they are in third place in the 2018 WeatherTech GTD driver and team championship standings, just 14 and 17 points behind the second and first-place teams.

The No. 75 SunEnergy1 Racing Mercedes-AMG GT3 had an eighth-place showing in Detroit. Kenny Habul led his first race laps of the season, while Bernd Schneider took over after Habul brought the No. 75 in for its only stop at 42 minutes. Schneider made his debut on the Detroit Belle Isle circuit on Saturday and set the fastest GTD-class lap of the race, but he was unable to advance on the circuit in the end.

“I didn’t know the track before but after practice I felt quite comfortable,” Schneider said after the race. “The Mercedes-AMG GT3 was really good from the beginning. We made small changes and improved but Kenny was really unlucky to be held up on his fastest lap in qualifying. That meant we started ninth on a track where overtaking is hard. Otherwise, I think we had a really good chance at a top-five finish. The experience and the team effort were very good, but position eight was not what we were aiming for.”

The next race in the WeatherTech Sportscar Championship is set to take place on June 28 to July 1 in Watkins Glen, New York, at Sahlen’s Six Hours of the Glen.