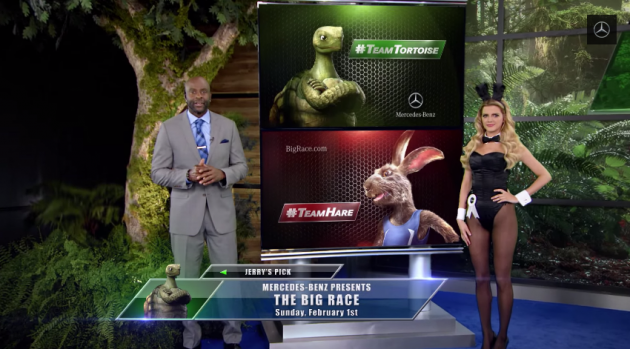 While Chevy, Ford, and Brandon Bostick all decided they didn’t want to go to the Super Bowl this year, not every automaker is skipping America’s biggest sporting event/advertising venue. A Mercedes-Benz Super Bowl ad featuring legendary 49ers wide receiver Jerry Rice will air during the fourth quarter of Super Bowl XLIX, between the New England Patriots and Seattle Seahawks on Sunday, February 1st, at 6:30 pm on NBC.

And because we live in an age when everything needs to be hyped to the nth degree, Mercedes is currently running commercials for the commercial. The Super Bowl ad itself is a modern take on the classic Tortoise versus Hare fable, and the teaser ads that have already begun airing feature Jerry Rice debating who will win “The Big Race” between the two.

The first one features Rice and eight-year old rabbit owner Andrew Hunter arguing over who has the edge—#TeamTortoise or #TeamHare:

In the next teaser ad, Playboy’s Miss September 2014 picks (unsurprisingly) the bunny to win:

Now, here’s the fun part: Mercedes-Benz is giving away a free Big Race viewing party, and to enter, you just have to tweet why you’re either #TeamHare or #TeamTortoise, along with the hashtag #Contest.

Because history has taught us nothing, we are going #TeamHare all the way. @MBUSA #Contest: http://t.co/bnUCJGwURG pic.twitter.com/J75zgjW4ES