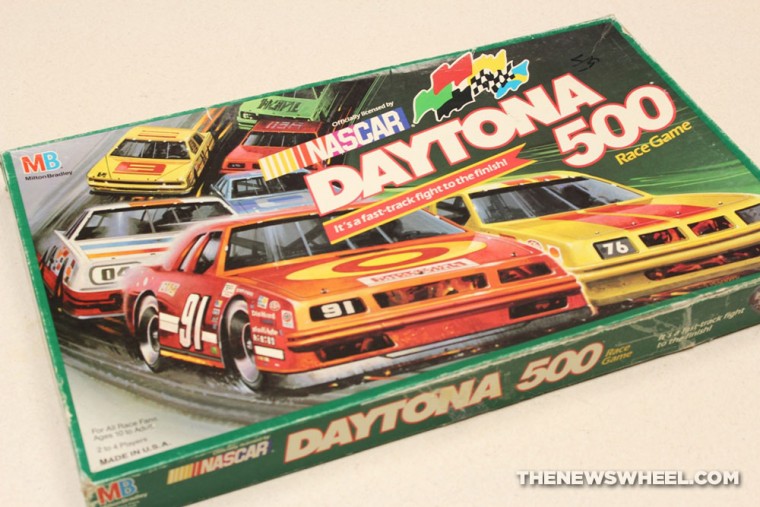 Adapting automotive racing into a board game is a challenge. Some games oversimplify it and miss the strategy, while others over-complicate it and lose the thrill. The officially-licensed NASCAR Daytona 500 Race Game finds that rare balance and drives it home. Don’t let its NASCAR branding or Milton Bradley publication fool you–this is a well-designed and fun even for adults.

The game was designed by the legendary game designer Wolfgang Kramer, Germany’s first notable professional game designer, known for his accomplished work on 200 games, including El Grande, Heimlich & Co., and Tikal. Though his name isn’t mentioned on it, Daytona 500 possesses an obvious “Euro-game” approach to strategic gaming.

To win, a player must accumulate the most amount of money after three races. This is done by bidding on the right cars, winning races, and not blowing all your money at the auctions.

Before each auction, players are dealt cards that contain “speed values” for different colored cars. Based on the cars with the highest values on the player’s cards, that person will determine which colored car they want to bid on and “sponsor.” Bidding commences, as each player tries to gain sponsorship of their favored car.

Then, the race begins! Cars are placed on the game board. Participants play the cards in their hands (going counter-clockwise, laying one card at a time) and moving the cars accordingly. Often, one card will move multiple cars or affect nearby cars on the track.

Based on the order cars cross the finish line, sponsoring players will win a given amount of money for their car’s success. 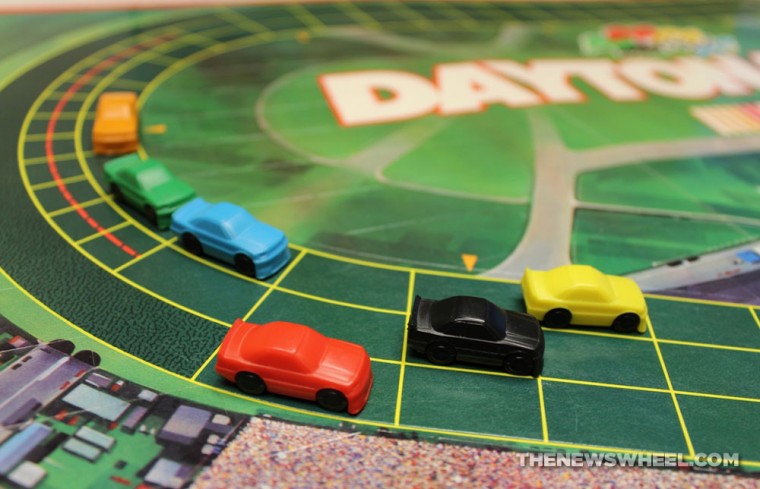 The components–the cards, board, and playing pieces–are all standard Milton Bradley quality: nothing impressive but sufficiently functional. All the pieces are rudimentary yet can will hold up 25 years later. The fake paper money is essentially the same design used in other MB games, making it interchangeable. Color choices on the board are a bit dated (like the green track instead of grey) but that’s a nitpick.

A shortcoming is probably the size of the board and the box. I probably won’t fit into the compact libraries that people today have, being even wider than traditional American board games like Monopoly. It’s bulky and inconvenient to carry around, too. Too bad the board doesn’t fold up more compactly. 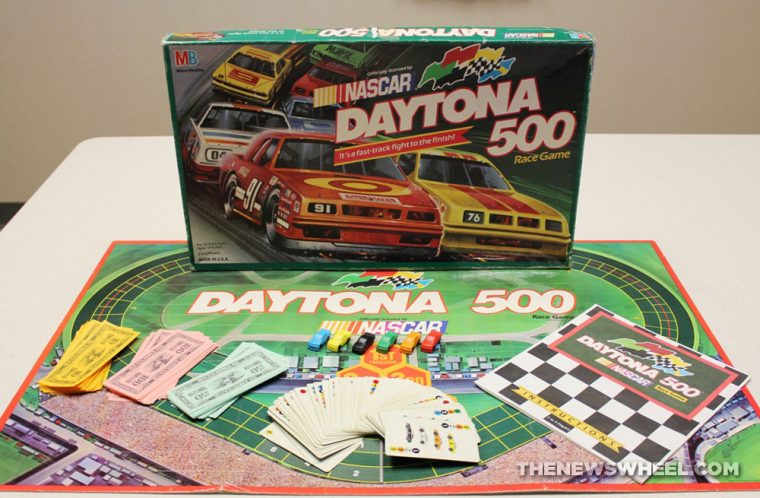 The first time you learn how Daytona 500 works and attempt developing a strategy will be a rough, especially if you’re playing with younger adults. However, because the game consists of three races, repetition will build understanding. At its core, Daytona 500 is still a play-your-cards and move-your-pieces game, and its simple goal of winning money is easy to grasp. The more subtle mechanics, like drafting and jockeying for position at the curves, takes time to learn but add great chain-reaction elements.

Designer Kramer has employed these same mechanics in multiple versions of the game, including Niki Lauda’s Formel Eins (1980, in which he originated the design), Detroit-Cleveland Grand Prix (1996), and Top Race (1996). Due to the high price of Daytona 500, if you can’t find the official NASCAR version, any of these other re-issues are just as good. 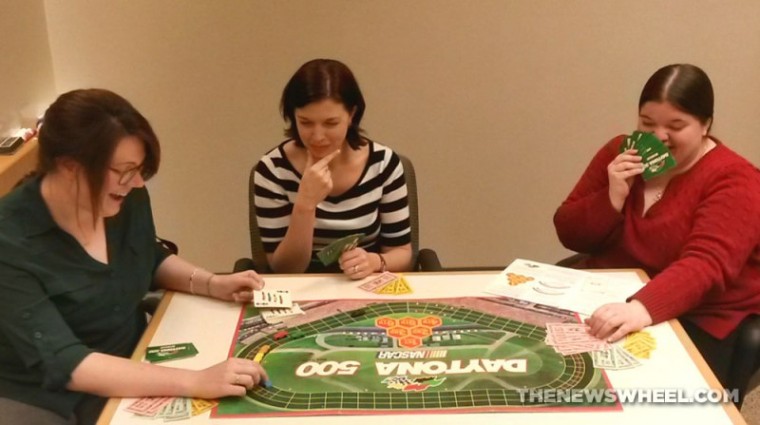 In which order do you play your cards, based on what other car is ahead of you? Do you put all your speed on one car of yours and neglect another, or play evenly? What do you do if you don’t win your initial auction? These are all questions you will be faced with when you play Daytona 500. This game isn’t a passive game of chance–it’s a strategic challenge that compels you to remain a step ahead of your competitors.

As I mentioned before, Daytona 500 strikes the perfect balance of strategy and thrills as players must devise their plan of attack based on the cards they’ve been dealt. And the order in which the cards are played makes a big difference, especially when “drafting” off nearby cars. It’s graspable by adults and young teenagers, gamers of American or European-style. In fact, you don’t even have to be a fan of auto racing to enjoy–and win–Daytona 500.

The only real criticism of the game is its replay value. While it’s easy to learn on a basic oval track, the simplicity of the circle does have its limitations. It would be great if there was a second track that was more complex–which is actually something that was improved on subsequent re-issues (like D-C Grant Prix) with a two-sided board.

While it might not be worth a $100 price tag, Daytona 500–or any of Kramer’s racing-themed games–is worth purchasing second-hand when not outrageously priced.

NASCAR Daytona 500 Race Game is out of print, but available used on online marketplaces like Ebay and Amazon.