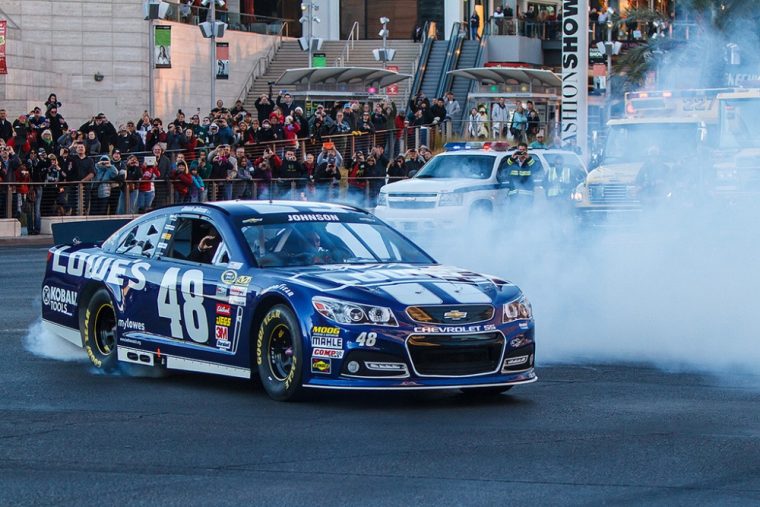 Despite already being eliminated from title contention, 39-year-old Jimmie Johnson was able to pick up his fifth win of the 2015 season at Texas Motor Speedway, when he passed driver Brad Keslowski with only three laps to go.

Keslowski started the race from the pole position and led 312 of the possible 334 laps, which set a track record, but he couldn’t hold off the six-time NASCAR Sprint Cup Series champion when it mattered most. Keslowski finished the race in second and Kevin Harvick came in third. Kyle Busch and Carl Edwards rounded out the top five.

Sunday’s win was the 75th of Johnson’s Sprint Cup career and he’s won all of them driving the No. 48 Chevrolet SS owned by Rick Hendrick. Johnson is now only one victory behind the late Dale Earnhardt Sr. for seventh-place on NASCAR’s all-time wins list.

Johnson’s teammate and fellow Chevrolet driver, Jeff Gordon, is the only driver to clinch a spot in the final round of NASCAR’s playoffs.

Joey Logano finished 40th at Texas, 66 laps behind Johnson, which was due mostly to blowing a tire 10 laps into Sunday’s race. Logano will have to win the next race at Phoenix to secure a spot in the final round of the playoffs, since he was intentionally wrecked by Matt Kenseth last week at Martinsville.

Next up for the NASCAR Sprint Cup Series is Phoenix International Raceway for its next-to-last race of the season on November 15th. The race is scheduled to begin at 2:30 pm and will be broadcast by NBC.

More From Team Chevy: Have you heard how much horsepower Chevy has packed inside the 2015 Camaro?