The latest advertisement from Buick highlights the brand's expanding lineup of utility models, signaling Buick's shift away from sedans and convertibles

Buick is experiencing a “wave” of change

When Buick launched its “That’s Not a Buick” advertising campaign a few years back, it was to highlight the new look that the Buick line had adopted. Buick’s most recent advertisement, entitled “Mistaken Identity,” employs a similar theme of misidentifying Buick vehicles.

Yet, while the old advertisements broadcasted the new design portfolio of Buick’s vehicles, this latest commercial seems to signal another change for the Buick line: a shift away from sedans.

The Crossover Takeover of the Buick Brand:  The 2018 Buick Crossover/SUV lineup

As the ad starts, a couple is retrieving their car from a valet after a night out. The valet retrieves a Regal Sportback, while their ride is actually an Encore.

Next, a group of surfers are trying to find a place to store their boards in their friend’s Buick. While there’s nowhere to place the surfing gear in a nearby Buick Cascada convertible, their friend corrects their error by pointing out she drives a Regal TourX. 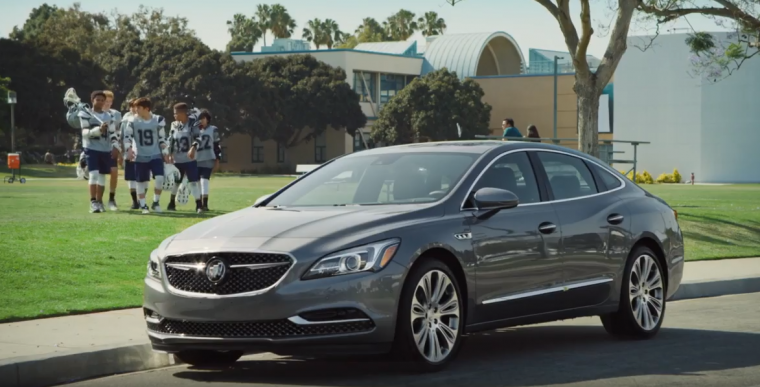 A group of lacrosse players featured in the commercial need to all fit inside one Buick vehicle. While the ironically-named LaCrosse doesn’t have enough room for them, a nearby Buick Enclave does.

Finally, a couple walking down the street are admiring a pair of Buicks. While the husband compliments the Buick Regal, a billboard for the Buick Envision catches the wife’s eye.

You can watch the entire commercial down below:

All of the cases of mistaken identity featured in the ad have one thing in common: onlookers mistake someone’s Buick for a traditional Buick sedan. Ultimately, it is the utility model that serves as the desired vehicle.

This points to a shift away from Buick’s traditional passenger car models in favor of SUVs and crossovers. Due to Buick’s sales so far this year, that isn’t at all surprising.

Year-to-date, sales for Buick’s SUVs, such as the Enclave and Encore, are on the rise. Enclave Sales are up by 15.3 percent, while the Encore easily takes the title of Buick’s best-selling vehicles.

On the other hand, sales for Buick’s passenger car models are experiencing an opposite sales outcome. LaCrosse sales are down by 9.7 percent, while Cadscada sales have fallen by 33.7 percent.

Don’t be sad about the death of Buick’s sedans. It’s the future you chose.

This shift away from sedans and passenger cars toward crossovers and SUVs is not limited to the Buick brand. Indeed, this same sales shift can be observed across the industry.

Buick’s latest set of advertising suggests that the brand has no plans to fight this new trend, instead choosing to embrace it. Indeed, the days of Buick being known for its luxury sedans could soon be coming to an end.