Google Glass has been in the news a lot recently regarding the possible legal ramifications that could come if you wear the headband-like device while driving.  West Virginia and Delaware are considering creating laws that would ban Google Glass in moving cars, and a California woman was recently ticketed for wearing hers, so this is an interesting time for Nissan to unveil their very similar product – the Nissan 3E.

The Nissan 3E is set to debut at the Tokyo Motor Show, but other than that we don’t know much about it.  Nissan released a brief “birth” video for the 3E, but that’ll have you questioning what is causing the shirtless man in it to convulse so violently and why the 3E makes him stop. 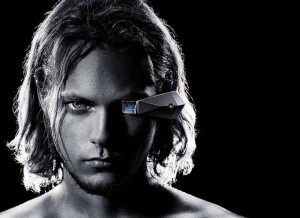 The press release from Nissan on the 3E wasn’t much help either. The “Nissan 3E is a glasses-type wearable device currently under development. The device can be connected to the Internet in real time, allowing the users to overlay acquired information on the glasses, record projected images, and communicate with others by sending information to their glasses.”

So, from what we can tell, the Nissan 3E is going to be an infotainment system that you can attach to your face.  Step aside SYNC with MyTouch, IntelliLink, CUE and the countless others, because the Nissan 3E isn’t going anywhere… unless the next weird video tells us how to take it off.

What do you think of the Nissan 3E wearable device?