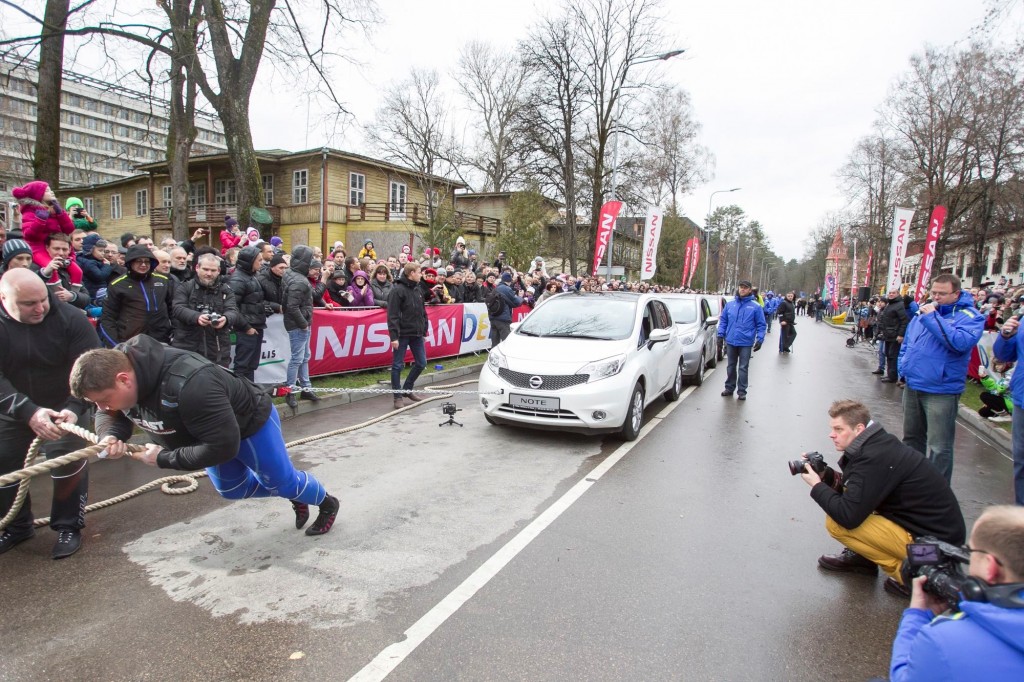 Who’s got two thumbs and towed 12 brand new Nissan Notes a distance of five meters in just over 30 seconds? Zydrunas Savickas, the world’s strongest man, that’s who (Please don’t ask us to pronounce his name because, spoiler alert, we can’t).

Nissan and the world’s strongest man recently teamed up to set a new Guinness world record for something unimaginably difficult: the “Most Cars Pulled By One Man.” In total, Savickas, a five-times World Strongest Man champ, pulled twelve Nissan Notes (totaling 28,530 whopping pounds) a distance of five meters in 32.9 seconds. A special pulling harness helped make the feat possible.

The record-breaking event was held at the end of the Lithuanian Car of the Year test camp in Druskininkai, Lithuania (And no, we can’t pronounce that one either). Savickas, a national hero, drew large crowds for the event, after which he was presented with a Guinness World Records certificate from representative, Jack Brockbank.

“We at Nissan like setting records and are always aiming high. Today we are delighted to have been able to help Zydrunas set another world record and to see so many people turn out to support him,” remarked Taina Erkkilä, Communication Director of Nissan Nordic Europe. “It was a great way to mark the end of the Lithuanian COTY camp.”

But it was Savickas himself that we were most interested in hearing from: “It is always great to set a new record. Once I got into my stride pulling the 12 Nissan Notes was fine. Obviously, a big thank you to Nissan for helping me set the record and making it all possible.”

The all-new Nissan Note launched in Europe earlier this year to wide success. Powered by a Pure Drive 1.2-liter gas engine paired with a manual transmission, the Note provides European drivers with the perfect blend of fuel-efficiency, power, and practicality, all at an affordable price in a well-designed exterior. And should you ever need twelve of them delivered to your house, well, Savickas is the guy to call (please work on pronouncing his name before you do).

Brought to you by James Ceranti Nissan in Greenville, MS.