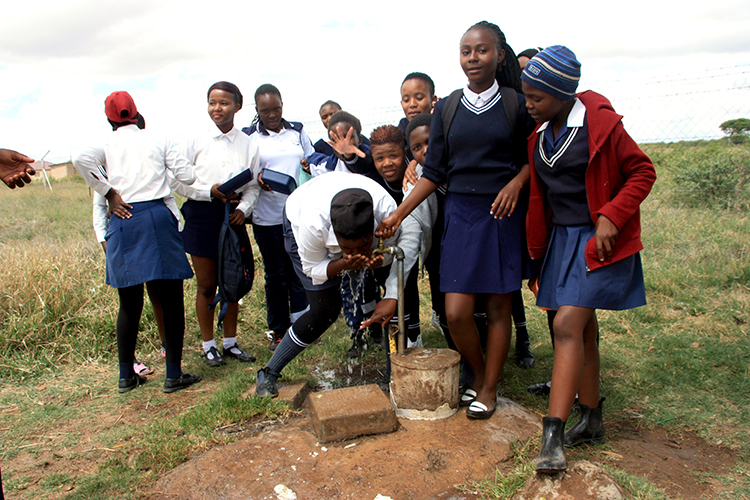 Learners at the Bahlologa Secondary School in Lonsdale, Limpopo, in South Africa, test out the newly donated water system from Nissan
Photo: Nissan

Nissan continues to demonstrate its commitment to helping the public with its most recent act of generosity, a donation of a completely functional water system to a secondary school in South Africa.

“This new water system is going to change our lives,” said school principal, Ms. Mashiane. “The learners and staff now have access to four taps, and that’s amazing. It gives me great pleasure to know that there are companies out there like Nissan which listen to our pleas and help when we need it. We are very grateful for their kind donation.”

Nissan South Africa revealed the system to the community leaders, teachers, and students at Bahlologa Secondary School in Lonsdale, Limpopo. The school reached out to the automaker for a water tank, but after reviewing the request and the system, Nissan decided a water tank was not a sufficient solution, and instead offered to overhaul the borehole system, which now features four taps instead of the original one giving much easier and greater access to water for the hundreds of students enrolled at the Bahlologa Secondary School.

“Access to water is a basic human right and it’s the gift of life. After we conducted an analysis, we realized how important their request was and decided to do much more than just donate a water tank. Part of Nissan’s global corporate social responsibility strategy is to enrich the lives of everyone on this planet, and this obviously starts in our own back yards,” said Keba Matlhako, Nissan South Africa Corporate Social Responsibility manager.

In addition to donating the actual water system, Nissan employees have also volunteered their time to assist the school as well as share “words of encouragement with the learners in an effort to illustrate that there are companies, such as Nissan, that are willing to listen to people and help when they can,” reports Nissan.