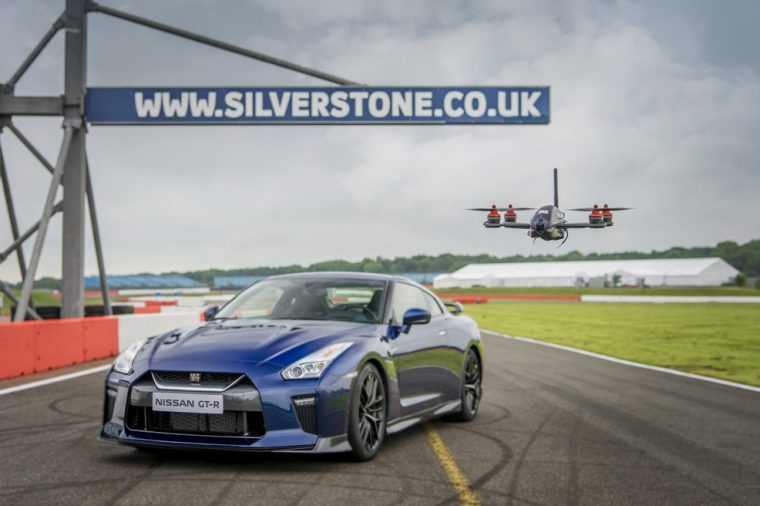 Nissan builds some pretty amazing cars, and the Nissan GT-R is their pride and joy. Each one is powered by an engine built by hand by some of Nissan’s most qualified engineers. The vehicle recently set the record for the fastest drift, and is on the wishlist of the most respectable of car collectors. What could make this car any better?

It turns out that Nissan thought the answer to that question was a drone. This is not just any drone, though. This high-powered drone can go from 0-100 km/h in only 1.3 seconds. The drone was unveiled at the Goodwood Festival of Speed, and both the drone and the GT-R that inspired it were set to be on display all weekend.

To prove to the world how powerful this drone is, the all-new 2017 Nissan GT-R took to Britain’s challenging Silverstone track with the GT-R Drone for a friendly race. The car’s four wheels were driven by NISMO driver Ricardo Sanchez, and British National Drone Racing champion James Bowles was the pilot of the drone’s four propellers.

The GT-R Drone managed to accelerate faster than the earthbound model, but as the race wore on, the 2017 Nissan GT-R was able to gain ground against the drone and overtake it. The drone’s top speed is only 185 kph, and the European model of the Nissan GT-R can achieve 315 kph. The GT-R Drone was certainly the most agile of the two vehicles, with a turning radius of .3 meters.

We can measure the merits of the two cars against each other all day, but it all boils down to who crossed the finish line first. That honor goes to the 2017 Nissan GT-R, which has been completely refreshed for the upcoming model year. This is probably only one race of many that the vehicle will eventually dominate when it arrives in dealerships.