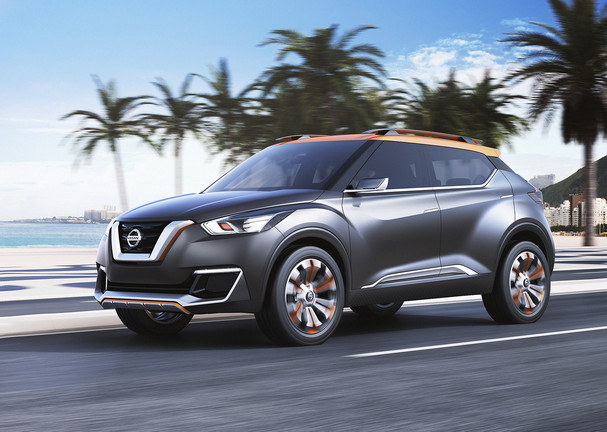 The Nissan Kicks Concept was revealed back in 2014 at the São Paulo International Motor Show. Its dramatic styling and unique name caught the world’s interest. Nissan’s design team drew their inspiration for the sporty compact crossover from the nation of Brazil and its vibrant culture. From the moment it was unveiled, however, the question on everyone’s lips was, “When will this vehicle hit dealership showrooms?”

Earlier this month, the official announcement came down from Nissan that the Kicks will enter production this year. The Nissan Kicks will be built, appropriately enough, at Nissan’s Resende Industrial Complex in Brazil’s Rio de Janeiro State. Over $192 million was invested in the facility to prepare it for production, and 600 new jobs will be added to take on the additional workload.The crossover will join the Nissan Versa and March compact cars that are already manufactured at the facility.

The Nissan Kicks will be sold first in Latin America and the country that inspired it while Nissan conducts research to see what other markets would embrace the vehicle. America currently has the Nissan Juke, which is a compact crossover in a similar vein as the Nissan Kicks. Nissan executives will have to decide if the United States would purchase both vehicles, or if only one can stand at American dealerships.