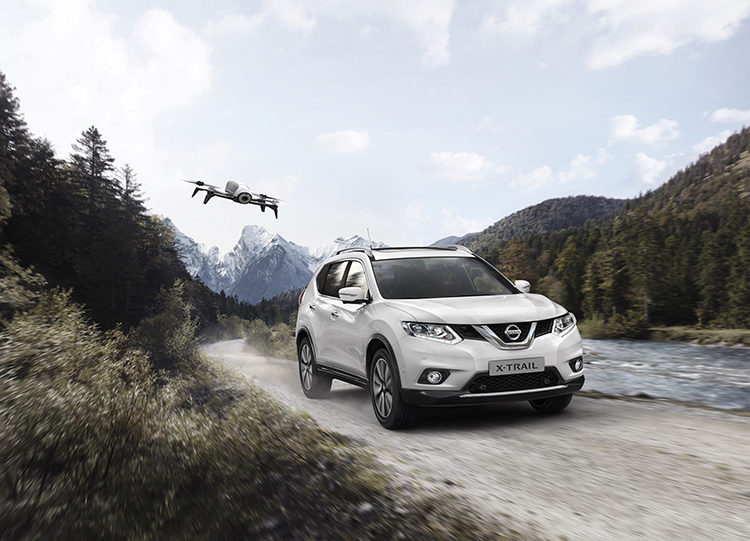 The Nissan X-Trail crossover offers the advanced Parrot Bebop 2 drone as a standard feature in the United Kingdom
Photo: Nissan

The quest to capture family memories and adventures has reached new heights, thanks to Nissan. Available in the U.K., the Nissan X-Trail X-Scape crossover now comes equipped with a very special and high-tech standard feature, the Parrot Bebop 2 drone.

According to Nissan, the drone has visual tracking technology and “follow” me GPS, “so users on the move can capture amazing photos and video footage of their days out with their drone following them autonomously.”

The Nissan branded drone offers First Person View (FPV) capability through a live feed from the megapixel camera as well as a Parrot Cockpitglasses headset and Parrot Skycontroller 2 remote control. These gadgets help the drone to present a “truly immersive experience and unique bird’s eye views of adventure locations.”

According to Nissan, the Parrot Bebop 2 weighs approximately 500 g, and it and its complimentary equipment can be transported easily and compactly in a “bespoke backpack-style padded storage case.”

“The drone’s exceptional maneuverability and digitally stabilized camera create a fantastic filming platform, for great results over a flight time of up to 25 minutes,” reports Nissan.

The drone-equipped Nissan X-Trail is considered a Special Version pack, and according to Nissan, is available “across the X-Trail range on all N-Vision and Tekna versions as a £500 option, which can be specified when ordering via Nissan retailers in the U.K.”

Plus, the NissanConnect infotainment system that features satellite navigation is also included in the X-Trail X-Scape Special Version pack.

“The panoramic sunroof with one-touch electric sunshade means the views should be spectacular, and roof rails allow bikes and canoes to be carried with ease,” according to Nissan.

Drivers can also specify what amount of interior space they want in the Nissan X-Trail—five- or seven-seat configurations.