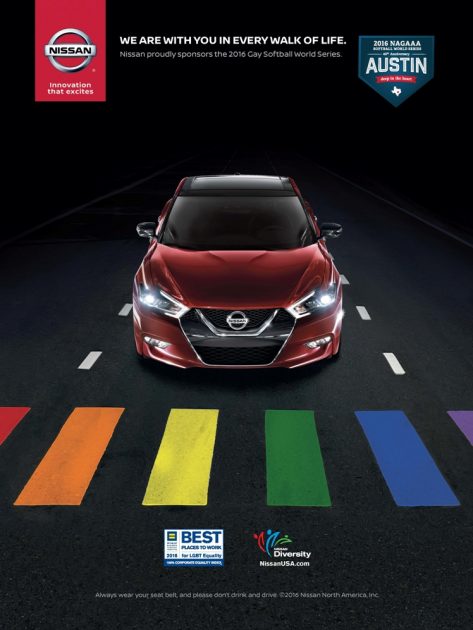 Here at The News Wheel, we often talk about the good work that Nissan does in its communities. The company works hard to make sure as many people as possible benefit from their community outreach, and that includes the LGBTQ population. This past weekend, August 15th-20th, Nissan worked with the North American Gay Amateur Athletic Alliance to sponsor the 40th Annual Gay Softball World Series (GSWS) in Austin, Texas for the second year. This is in addition to the support Nissan provides for LGBTQ and Pride events throughout the year, such as New York City Pride, Orlando Pride, Nashville Pride, and Capital Pride, to name a few.

According to Erich Marx, director of marketing and executive sponsor of the Gay Straight Alliance at Nissan (GSAN), “Our LGBTQ outreach is a point of pride for employees and helps us attract not only new customers to the Nissan brand but also potential employees. The Gay Softball World Series is a great fit for Nissan and gives us a chance to get involved in the community and present a compelling, personalized experience with our vehicles and our brand.”

Nissan has always been proud of its support for LGBTQ employees. Its GSAN works hard to ensure that the workplace stays friendly for all types of employees, with workshops to encourage understanding, inclusive benefits, and sponsoring groups including the National Lesbian and Gay Journalists Association. The automaker has also earned a perfect score with the Human Rights Campaign since 2013 in its Corporate Equality Index, after being one of the fastest climbing companies featured in the index, for being friendly to LGBTQ hires.

The North American Gay Amateur Athletic Alliance Open Division is a nonprofit international sports organization that was founded in 1977. More than 185 teams from around the USA and Canada attended this year’s Gay Softball World Series, flocking from 43 different cities. More than 5,000 spectators were expected to take in the games, as well as the opening and closing ceremonies.