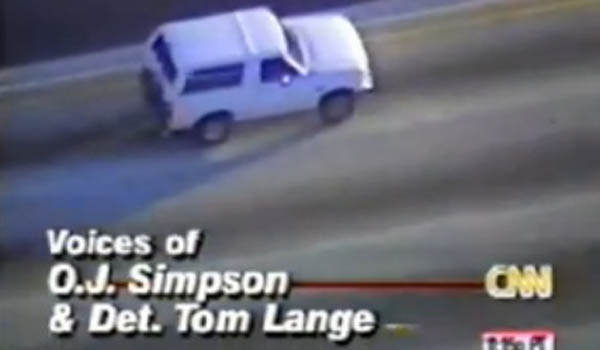 Today marks 20 years since the nation was captivated by a 90-minute slow speed chase along involving O.J. Simpson and a white Ford Bronco. Though the chase eventually ended peacefully and would lead to the “Trial of the Century” metric by which all bloated courtroom theatre macabre spectacles shall forever be measured, it often comes right back to that white Ford Bronco.

Whether Simpson and driver A.C. Cowlings’ intentions were to make some kind of clean getaway, to try and create sympathy for the former Heisman Trophy winner, or just to make as preposterous a show of things as they possibly could is unclear, but the chase down Interstate-405 has become an iconic image that is inextricably tethered to the decade of the 90s. And while the trial of O.J. Simpson will likely be remembered forever for the moments and characters it created—from Cochran’s “If it doesn’t fit, you must acquit” to the inexplicable Kato Kaelin, all of which washed over the actual tragedy that was two lives lost in a grisly murder—it all begins with the white Ford Bronco.

Production of the Ford Bronco ended in 1997, though Ford has adamantly denied that the decision to move in a different direction with the Expedition was in any way impacted by the Bronco’s involvement in the O.J. Simpson case. Will Ford ever revive the name badge? It’s unlikely. The Bronco’s role in that famous trial commands too much of its legacy, and it would be nearly impossible for a vehicle with a Bronco badge to ever escape from that shadow. 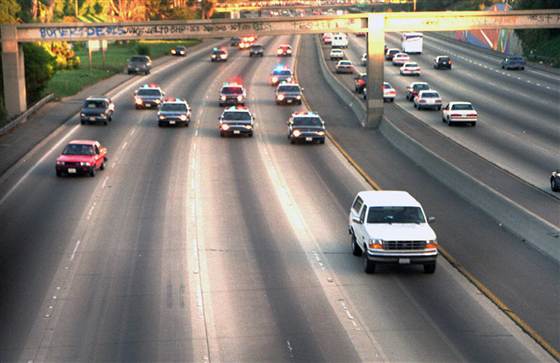 So whatever happened to the white Ford Bronco? USA Today has the full, sordid tale about its acquisition by Michael Pulwer for $75,000 and its subsequent use as a tawdry set piece at the opening of a sports memorabilia museum and an art exhibition. Ultimately, the whereabouts of that Bronco are unknown.

As for Simpson, he’s currently serving out a prison sentence for a number of charges related to an armed robbery and kidnapping from 2007. With a minimum of four years and a maximum of about 28, it’s entirely possible that Simpson will die in prison, alone and nearly entirely forgotten. As for the trial, and that fateful chase that started it all 20 years ago, it will likely always be a strange-yet-significant part of our history.