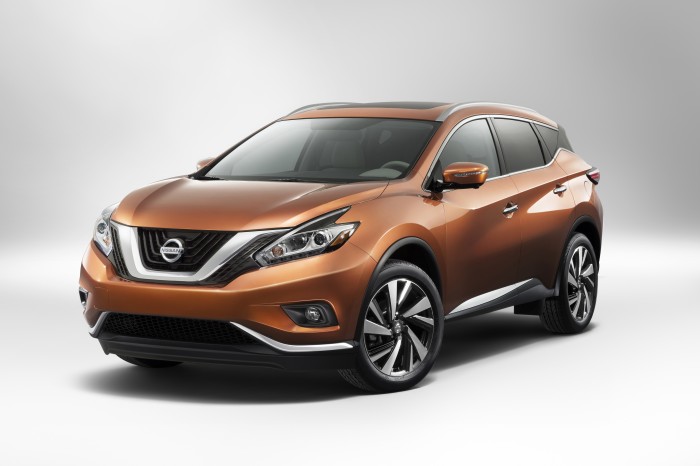 Late last month, Nissan offered a teaser of the all-new 2015 Nissan Murano ahead of the New York International Auto Show. Just days before the world debut, the automaker has unleashed full specs and some stunning photos of the updated Murano.

“Murano owners live in an environment – home, work and car – that is beautiful, well-designed and efficiently run. They are social and embrace technology,” explained Andy Palmer, Executive Vice President, Chief Planning Officer (CPLO) of Nissan Motor Co., Ltd. “The new Murano had to embrace all of these values, while also taking a major leap forward in terms of its ‘Wow’ factor.”

Reportedly, the 2015 Nissan Murano is meant to light the way for Nissan’s new design direction. Elements of this design include the Murano’s LED boomerang lights, the V-motion front end, and the “floating” roof. This design is mirrored by the interior, which Nissan describes as an “engaging social lounge” with advanced NASA-inspired Zero Gravity front and outboard rear seating, a refined lower-height instrument panel, large windows, a wide center console, and an oversized Power Panoramic Moonroof.

In a first for the Murano line, the 2015 Nissan Murano will be manufactured at Nissan’s Canton, Mississippi, plant. It will join eight other vehicles in production at the plant, which was established 11 years ago. This move to the Canton plant reflects Nissan’s goal to manufacture 85 percent of all Nissans sold in the Unites States at North American facilities by 2015.

The 2015 Murano will be offered in four grades—S, SV, SL, and Platinum—when it arrives at dealerships in late 2014.