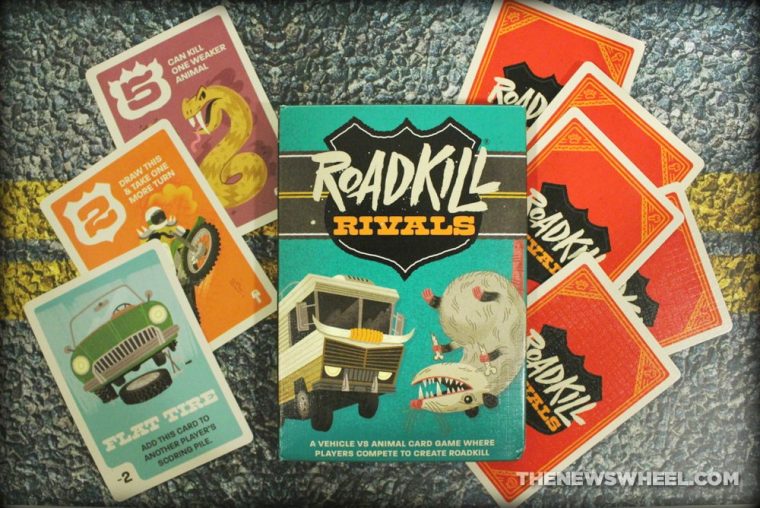 I’m an avid fan of offbeat card and tabletop games. Because crowd-funding channels like Kickstarter are producing a wealth of unconventional ideas these days, many creations that wouldn’t have seen the light of day otherwise are receiving their rightful releases.

Hearing that Pygmy Giraffe Games has created a card game about making roadkill, I was definitely intrigued. Originally funded via Kickstarter last fall, Roadkill Rivals is a fast-paced card game set on the dangerous freeways of the American Southwest. It’s chaotic, colorful, competitive, and worth a closer look.

In Roadkill Rivals, you compete against other players to gain the most points by running over animals (skunks, opossums, rattlesnakes, armadillos, coyotes) with vehicles.

Participants draw face-up vehicle and animals cards of varying value from the center of the table (the “freeway”) and add them to their personal lineup of cards (their “lane”). Vehicle cards with values higher than or equal to those on animals cards can “make roadkill,” gaining the player points for clearing animals from their lane. Based on the type and amount of animals your kill, you accumulate points that will win you the game.

To make the task more challenging, other players can wreck your vehicles, attack your animals, or impede your progress with “roadside” action cards. 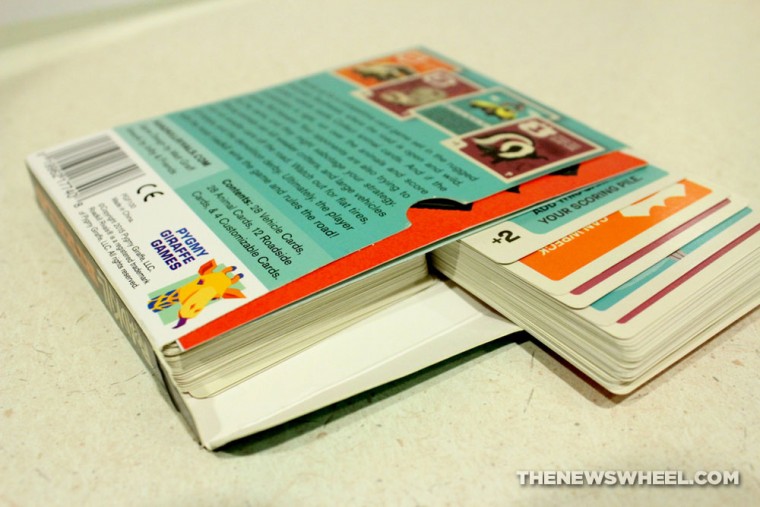 The packaging and game components value practicality over ornateness. The cardboard sleeve tightly fits the 72 cards without any wiggle room.  The publisher clearly recognizes that the more practical a game’s packaging is, the more likely people will carry it around. Thus, the box is a great compact size that’s portable and easy to fit into a purse or pocket. The one drawback is that, after only a few uses, the flap has begun creasing/tearing and will quickly wear with frequent use.

For as gruesome as the concept is, the artwork on the animal cards portray them as crazed and ferocious rather than cute and innocent. They’re fun and feature a lot of background detail without looking busy or crowded. The stylish sketches of Jolby & Friends make it easy for players to have a favorite card in the deck. The paw/highway silhouettes on the strength levels are clever, and the printed point values on the bottom make scoring a breeze.

The ideas for the customizable cards which are shown on the instructions pamphlet are fantastic; I wish those would have made it into the final deck as official cards because those are probably the ones I’m going to make. It would also be fantastic to see future expansions/variants feature different US regions. Heaven knows we have plenty of raccoon, deer, and squirrel on our Ohio highways… 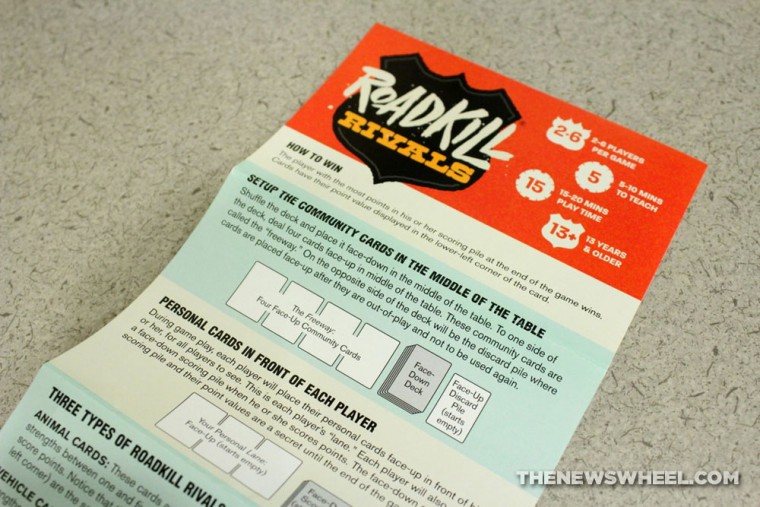 For the most part, Roadkill Rivals is a simple card game with straightforward mechanics that are easy to comprehend and teach new groups of players.

The fold-able instruction sheet lays out the aim, setup, card types, and turn order in to-the-point terms. Main points in the text are bolded/italicized to stand out and instructions are accompanied by diagrams. Learning the game does require some reading between the lines (for instance, how to discard cards you no longer want), so don’t speed-read the instructions or you’ll miss things. Once you read the directions though, you’ll rarely need to consult them again.

It takes some players time to get used to aspects of most cards games that are absent in (e.g. drawing from the face-down central draw pile, having a private hand of cards). Because of the lack of secrecy in Roadkill Rivals, teaching “open-handed” won’t hinder game play.

On the Open Road: We recommend this fun cargo-moving, cross-country trucking board game 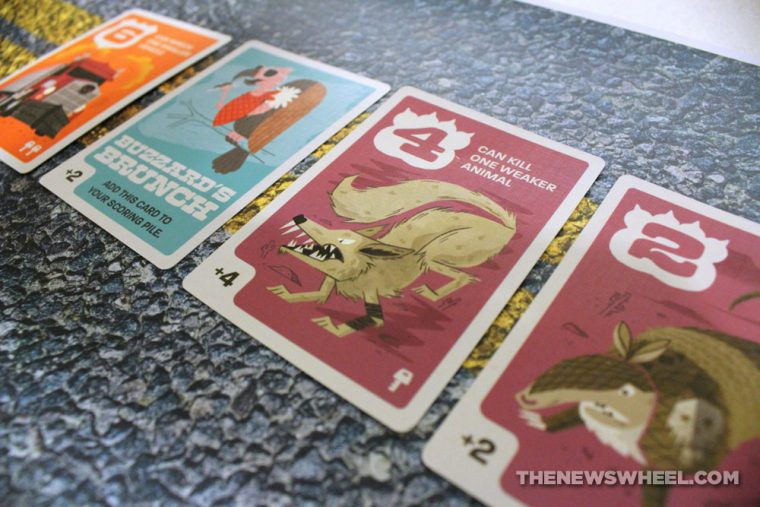 I’ll admit that hearing the morbid premise of Roadkill Rivals–accumulating points by running over animals with your car–disturbed me a bit at first, as it will for many who are animal-lovers. But the light-hearted artwork and simple but competitive game play made it much more palatable. It’s more of an animals vs. human road battle than the perverse mutilation of innocent creatures. So once you start playing, the concept won’t bother your group (and it’s far less offensive than what’s in some party games these days). 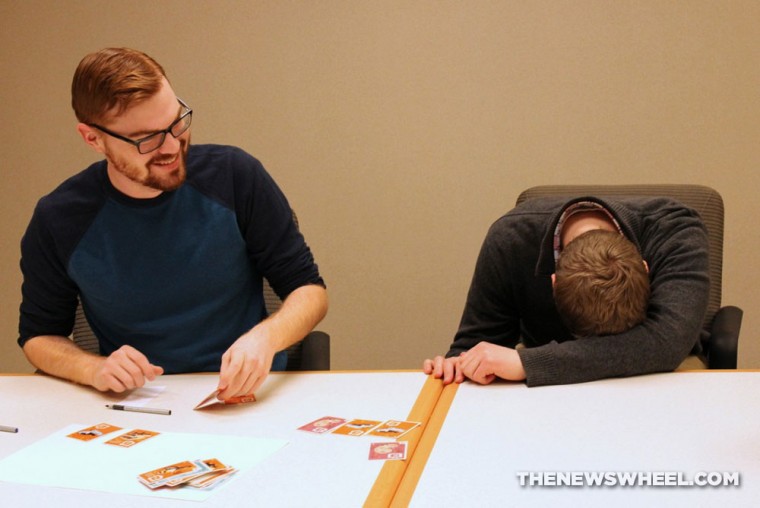 Victory was elusive for Patrick and Tim

What’s also great is that there isn’t an ideal number of players between 2-6, because the strategy varies based on the number of participants. Pairs or trios will focus on scoring high and gathering roadkill while larger groups leave players vulnerable to more sabotaging. Thus, the winner of our game of five highly-competitive players took the lead with only 10 points.

The News Wheel‘s staff learned and played a solid but casually-paced game of Roadkill Rivals within 45 minutes. The length can vary based on the actions taken during the game or the amount of strategizing. This makes it a great game for lunch breaks or warm-ups to more in-depth games. All participants had positive things to say and were fully engaged throughout. 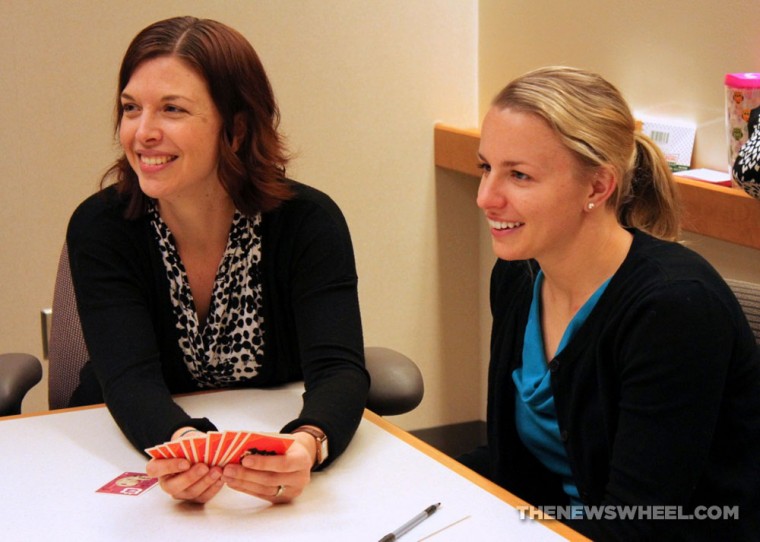 Cat and Molly (the winners) count up their points

Roadkill Rivals’ straight-forward mechanics and immediate points payout will appeal to most players, proving that games don’t have to be overly complicated to be rewarding. Simply put, it’s one of the most fun “draw-and-lay” card games we’ve encountered in a while.

The theme of Roadkill Rivals is definitely a twisted humor niche that won’t sound appealing to all people–and that’s totally fine. The tabletop gaming industry thrives on off-beat premises and unusual subjects. If, by the description, this sounds like an appealing idea for a game, you certainly should purchase it. The good news is that because of how accessible it is, you won’t have trouble convincing your friends or family to play it with you.

Roadkill Rivals is available for purchase through the publisher’s website.