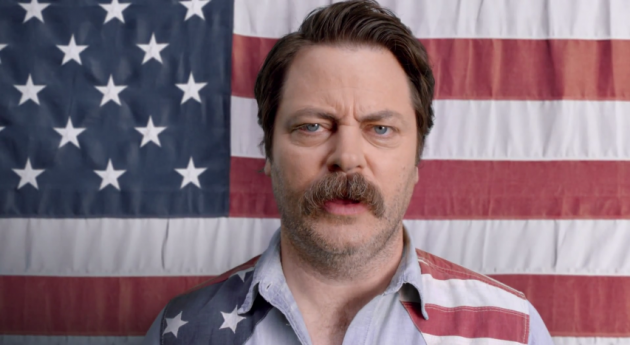 Nick Offerman, AKA Ron Swanson, tells America to man up and watch some NASCAR

Cat-like comedian and actor, Nick Offerman—best known for playing the uber-manly Ron Swanson on NBC’s Parks and Recreation—has lent his considerable talents to endorsing the sport of NASCAR (well, specifically the NASCAR races that air on NBC Sports).

In the commercial, Offerman decries the wussification of America, and implores you, the viewer, to get some “NASCAR in your life.” Take a look:

Titled “America Start Your Engines,” the video features a badass anthem that’s essentially the “Are You Ready for Some Football?” of motorsports (except Offerman seems a bit more self-aware than Hank Williams, Jr.).

Offerman previously made his sports fan credentials known when he fronted the Cubbies in an ad for New Era baseball caps:

NASCAR is one of those sports that most people either love or hate, and if you are in the latter camp, this ad probably won’t change your mind. Then again, if anyone can convince you to start watching racing, it’s probably Ron Swanson.