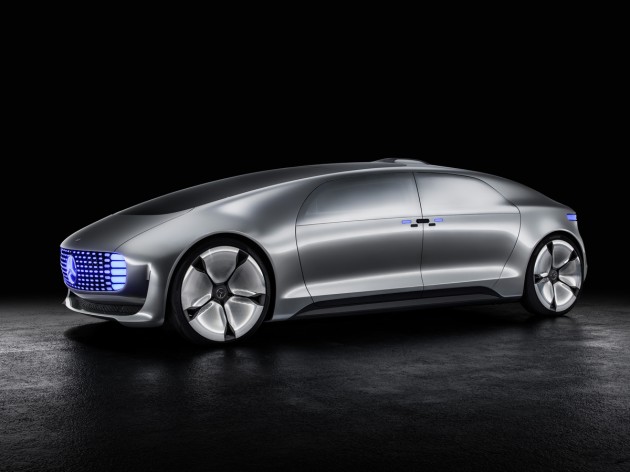 The Mercedes-Benz F 015 Luxury in Motion

This week, Mercedes-Benz used the Consumer Electronics Show in Las Vegas as a platform to introduce the German automaker’s new F 015 Luxury in Motion research vehicle. This futuristic model takes the concept of self-driving cars to a whole new level – a fact made clear in the promotional video they released, which plays like an excerpt from an upcoming science fiction movie.

Take a look at the fuel cell hybrid concept vehicle for yourself:

Crazy, right? In the official press release, Mercedes officials stated that “With this self-driving luxury [sedan], Mercedes-Benz illustrates how the car is growing beyond its role as a mere means of transport and will ultimately become a private retreating space. This new way of traveling gives passengers the freedom to use their valuable time on the road in manifold ways.”

They aren’t kidding. Thanks to the F 015’s four rotating lounge chairs, a driver can turn his or her back on the road and enjoy some quality time with their passengers. In the not-too-distant-future, you may be able to hold a business meeting in your car, or enjoy a meal of rehydrated pizza with your family while you marvel over the fact that the Cubs just swept Miami to win the World Series. Or, perhaps car customers will use the F 015’s lounge space to plot their next attack against their robotic ASIMO overlords – either way, the point is that you can do whatever you want while you’re driving, because you won’t actually be driving. 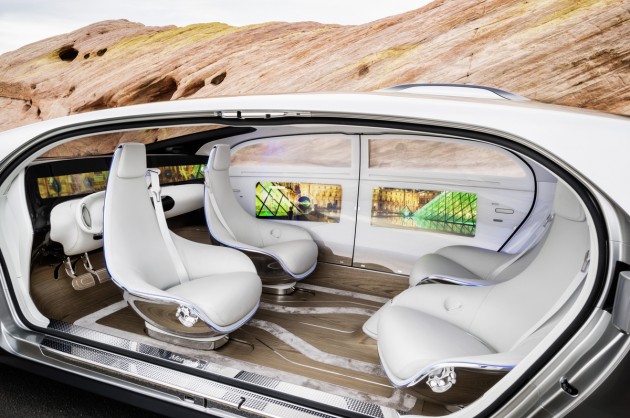 The release also states that there are “six display screens harmoniously integrated into the instrument panel and the rear and side panels, which turn the interior of the F 015 Luxury in Motion into a digital arena. Passengers can interact intuitively with the connected vehicle through gestures, eye-tracking or by touching the high-resolution screens. Sensors recognize the passengers’ hands and offer them user interfaces within convenient reach that present appropriate operating options for each particular situation. Particle streams on the displays visualize the vehicle’s movement.”

According to the F 015 Luxury in Motion video, in the future, people will jaywalk in the middle of the desert

So you also get to control things with a wave of your hands, which sounds pretty cool. While a car in which you could literally never have to touch the steering wheel probably sounds like hell for true automotive enthusiasts, the incredible convenience of such a luxury vehicle would be a paradise to those who drive for the simple purpose of commuting from point A to point B.

To see more of the self-driving Mercedes-Benz F 015 Luxury in Motion… well, uh, in motion, check out the full 5 minutes of footage below. It’s fascinating stuff: