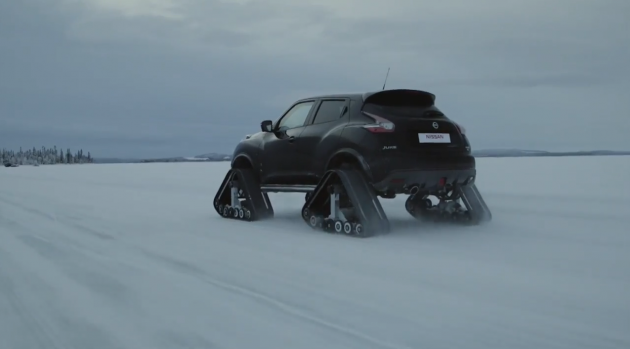 Nissan engineers have done some awesome things with the Juke, like the time they put all those GT-R bits in it, for example. This time, they fitted some DOMINATOR Track Systems snow tracks to it and drove it around in 15 inches of snow on a frozen lake in Finland.

Nissan claims that the Juke NISMO RS will go up to 50mph on these tracks in temps as cold as -31°F.

With these tracks, the Juke NISMO RS instantly transforms from a weird little crossover to a seriously badass winter tank for Alaskan soccer moms. If you had this Juke anywhere below the 49th parallel, you’d never have an excuse to miss work because of a blizzard and your kids would hate you for being the only family that snow days don’t apply to.

The wheeled version of the 2015 Juke NISMO RS is the souped-up version of the crossover, packing a 1.6-liter turbocharged engine that generates 215 horsepower. It offers all-wheel drive with torque vectoring that sends power to the wheels with the most traction to provide the best handling.

This car reminds us of Ken Block’s RaptorTRAX truck, which has four more cylinders and is accordingly four times more badass. Hopefully putting tracks on cars is a new trend in the auto industry and we’ll be seeing them soon on minivans, Volkswagen Beetles, and Prii. Which vehicle would you like to see snow tracks on?