Added on October 1, 2015  The News Wheel  Dwayne "The Rock" Johnson , Dwayne Johnson , Ford commercials , The Rock , The Specialists at Ford

The Rock to Star in New Ford Commercials 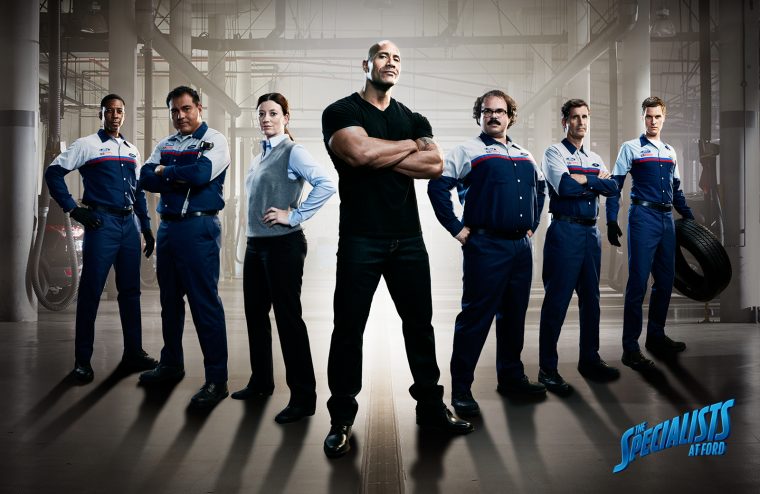 Do you smell what Ford is cooking?

The automaker announced on Thursday that it has signed “big-screen action hero, producer, and business entrepreneur” Dwayne Johnson to star in a new advertising campaign entitled “The Specialists at Ford,” which appears to tout the automaker’s vehicle services and specialists through comedy. And, hey, that’s awesome! Given Johnson’s box-office power, this is about as big a coup for the blue oval as snagging Matthew McConaughey was for Lincoln.

That’s all well and good, Ford, but you seem to have left out one important detail in your press release: that Dwayne Johnson is also the jabroni-beating, laow-laow-laow-laow-laow pie-eating, trailblazing, eyebrow-raising, eight-time WWE Champion, better known to his millions and millions of fans as the most electrifying man in sports-entertainment (or professional wrestling, if you’re a purist), The Rock.

Indeed, Ford only refers to Johnson by his given name, ignoring his nom de scraps as if the mere suggestion that an automaker would associate with a wrestler might cause faces to melt off ala Raiders of the Lost Ark. Frank Gotch would be ashamed of you, Ford. 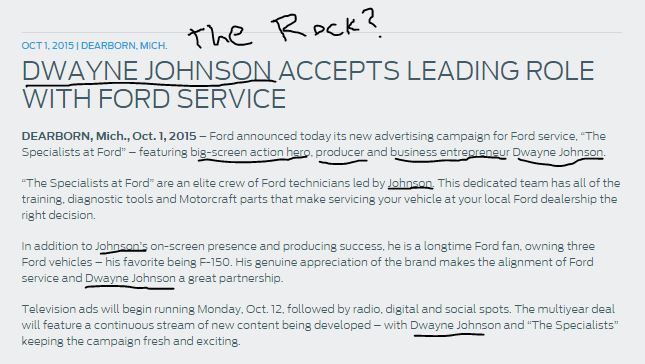 Despite Ford attempting to scrub Johnson’s pro-wrestling history like it was a four-volume set of booklets published by its patriarch and namesake in the 1920s and chronicling “The World’s Problem” in increasingly virulent terms, the addition of the sometimes-star of the squared circle will likely draw the eyes of fans from all walks, even those who happen to enjoy professional wrestling. Which isn’t a bad thing, because their money spends too, ya know.

Famously, The Rock is a renowned F-150 owner, which might be a testament to the fact that the man’s mass disallows him from fitting in anything smaller than a full-size pickup.

Let me check again… yup, still can’t fit in a Ferrari. Somethin’ women like about a pick up truck man anyway. #StunningItalianRide #ButDaddysGottaGoTo

Johnson’s role in “The Specialists at Ford” will have him presiding over a crew of presumably all-nerdy and all-shlubby technicians. Through the ads, Ford will play up service training, diagnostic tools, and Motorcraft parts like those you’d find at your local Ford dealer. Also, odds are good you’re getting at least one joke about hitting someone with a steel chair.

The commercials will begin running on Monday, October 12, and will be followed thereafter by radio, digital, and social posts.

Ford also says that the deal with Johnson is a multi-year contract, so there’s still hope that this will spin out into a Matthew McConaughey parody ad where The Rock is talking to himself from behind the wheel of an F-150.